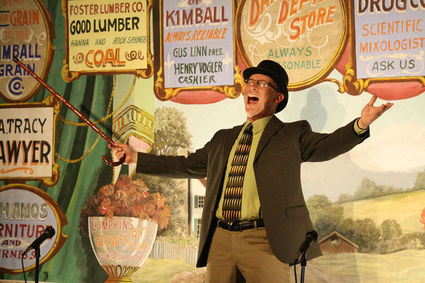 Tom O’Brien, one of the leaders of the Kimball Theatre, performs the opening number - “Willkommen” from the musical Cabaret.

The bright lights of New York City may be thousands of miles away, but this weekend, anyone who attended “A Salute to Broadway” would have never known.

Entering the room, there were hardly seats to be found - in fact, I stood at the back of the room for most of the performance, in order to make room for the countless young volunteers, who although were not on stage, played an integral role - serving dinners, getting drinks and accomodating guests.

The ornate ceiling flowed across the room before turning into the multicolored mural along the back wall, where the performance was about to begin.

Tom O’Brien kicked the night off with his powerful voice opening from the back of the room with a number from Cabaret, an oft-loved musical based on the German nightlife of the 1930s.

As he concluded, the audience erupted in a rousing applause for the first, of many, times.

Quickly, a familiar melody began to fill the room - “pure Imagination” from Charlie and the Chocolate Factory - which most people know as a film. The curtain rolled back, and the rest of the evening’s performers were revealed.

The often-overlooked story of the witches from “The Wizard of Oz” took center stage next, with Jen Dillinger and Aida Williams - one dressed in black, one in white - performing “What is this Feeling?” - part of the musical Wicked - which to this day, is taking the world by storm.

A back-and-forth comical exhange between Troy Carruthers and Melany Widener followed, with “Anything You Can Do, I Can Do Better.” from Annie Get Your Gun.

This duo was one of the most entertaining of the night, as they jawed back and forth, pushed and shoved, and sought to out-do each other in every way imaginable - perfectly in sync with their song.

Aida Williams then performed “Somewhere That’s Green,” from Little Shop Of Horrors - in what I found to be one of the most sterling performances of the night.

Following intermission, where several kinds of cake were distributed amonsgattendees, as they say - the show must go on - and it did.

The Kimball Cheer Team - made up of Maddie Snyder, Alexis Gawith, Ali Hunsaker and Jordyn McDowall - performed a dance to “Roxie” from Chicago, which is based on a 1926 play detailing the crime in the city.

Their routine drew hoops and hollers from the crowd, and extended bouts of applause several times, as well.

O’Brien, Williams and Dillinger all combined forces to tackle “Fugue for Tinhorns” from Guys and Dolls - a performance that was at times sharply contrasting, while at others perfectly harmonic. It was a truly unique sound.

Lexi Jackson then captured the attention of the audience with her rendition of “Popular” from Wicked. Her movements coincided with the song flawlessly, and despite some technical difficulties, she nailed it.

Dillinger then tackled one of the most famous musical numbers of all-time: “Think of Me” from Phantom of the Opera, which celebrated it’s 10,000th performance last February.

Her rendition of this classic number only added to the extraordinary feeling the entire show offered. She is no doubt another supreme talent in the area.

Many know the story of Sandra Dee from Grease, and three local youths brought the story to life in front of the audience’s eyes in sterling fashion.

Courtney Hunsaker, Rachael Merryfield and Melany Widener came together, flawlessly nailing the bit, and putting on an all-around performance that had many in the crowd laughing.

The final number of the night brought together the supreme talents of O’Brien and Williams for “A Little Fall of Rain” from Les Miserables, which recently came to the United States on the big screen.

It was a perfect conclusion to an evening that was both enchanting and utterly enjoyable.