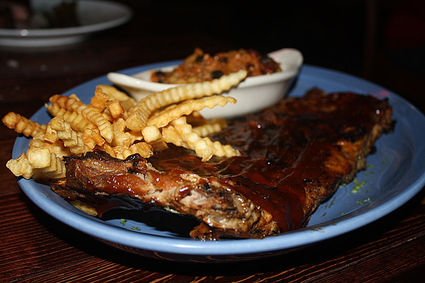 You could be forgiven for not expecting much more than flabby steaks and starters emptied out of a frosted plastic bag. steakhouses wedged between an interstate highway hotel and an all-night Shell station rarely waste precious time on food preparation and good old-fashioned mise en place.

But kitchen staff at the Golden Spur hand cut hunks of red meat into sizeable steaks. They also grind their own burgers, at least according to reports.

Granted, the meat hardly approaches USDA prime. But a New York strip marinated in cheap whiskey carried itself with a swarthy swagger under its sweet and oaky char. And our order came out precisely, with an inviting burgundy-hued center.

A full rack of ribs are slathered St. Louis style. Oh, sure--only the most adamant gourmands recognize St. Louis barbecue as a distinct genre, since the meat tends to be grilled rather than fall-off-the-bone slow cooked, and coated thoroughly in a brash sauce.

Likely the sauce came from a bottle--perhaps even Maull’s. But it struck the proper notes: overtly sweet, unabashedly tangy, rich in tomato, with just a few accidently swipes of spice.

Golden Spur serves the ribs on a platter with decent fries (if store-bought crinkle cut fries are your fancy), reasonable cole slaw and a rather odd bowl of cowboyed-up beans--imagine a “what do we have in dry storage” assortment of legumes, cooked to a near mash and tossed with flecks of hearty beef. The whole does not inspire colorful adjectives. Nor will you want to inspect the plate for hints as to its origin.

Really, I was just happy they dim the dining room lights. Yet there’s a rustic, haphazard, campfire quality to the beans that cannot be denied.

In fact, the kitchen likely intended to draw things down to earth a bit.

They are capable of some more upscale efforts, however. An appetizer plate (serving tray would be more accurate) of hand cut potato chips fried to a surprisingly crisp and golden state rests under crumbled bleu cheese, softened slightly in a cream-based dressing resembling alfredo sauce--without the spike of parmesan and parsley. In place of garlic they sprinkle rough cut scallions on top of the pile.

It’s something you just want to dig into--and never stop.

A side order of out of season asparagus receives deft treatment, gaining life from kosher salt and a scrub of garlic.

Obviously Golden Spur would falter when compared to, say, the great aged prime beef steakhouses of Dallas, New York, Chicago and other destination cities. Up against the main of western Nebraska, however, it stands out.

They even bring out warm bread and butter...and leave a pail of peanuts on the table, as well.

Welcome touches from a surprising restaurant.