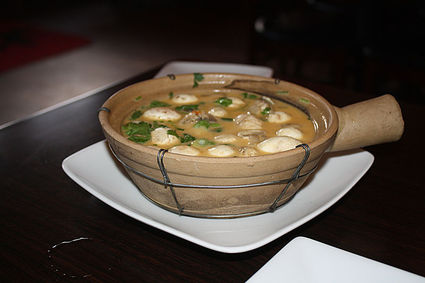 Anong’s Thai Cuisine opened on March 16, and you can tell.

Two or three bites into our appetizers, a waitress arrived with the entrees, forcing an untidy moment as several hands shoved plates around the overcrowded table.

The intrusion exposed a flaw unfortunately common to new restaurants: service slip ups. Staff members still learning the fine art of expediting often fail to communicate between the floor and kitchen and dinner guests take the brunt, gobbling down portions as quickly as possible or watching their plates congeal.

Too bad—for the cooking at Cheyenne’s outpost of the Rawlins and Laramie institution deserves contemplation.

Their version of the Laotian import known as larb is astounding. Breezy, tropical lime dances around the incisive step of crisp onion. Mellow toasted rice calms a hint of searing chile. There may even be a touch of pungent nam pla in the mix, for an inscrutable, intriguing tone seeps through the whole. And all of this roils restlessly over an earthy base of coriander, dusty spice and—in our case—shards of tender beef.

It’s bold and intricate at the same time. You can, therefore, forgive the introduction of romaine in place of the familiar cabbage.

Ginger—perhaps they felt galangal too gentle—and lemongrass in the tom kha strides across your palate with aggression in mind, only to be reined in and soothed by coconut milk and placid mushroom. The chicken in this warming soup absorbs these flavors, becoming cushy and complex.

Too often Thai restaurants on this side of the world emphasize spicy heat. Anong’s understands that even the most fiery dishes build from layers of more interesting flavors, and each should be discernable to the palate.

The menu includes favorites such as tom yum, the familiar hot and sour soup found all across southeast Asia, massaman curry, spicy basil leaves and more. Owner Angong Larsen grew up in Thailand and nine years of restaurant experience in Wyoming has made her and her staff adept at meeting the demands of authenticity and local expectations.

There are a few missteps, here and there. Crispy duck suffers from a sweet and sour sauce so pedestrian in nature you might find it on a bargain shelf at the supermarket. Yet the meat itself is beautifully rustic, with a rich and musty center, frayed smoky edges and a brittle crust.

For the most part, however, the kitchen turns out absorbing dishes. When larb or tom kha arrives at the table, conversation soon dwindles as attention focuses on vibrant flavors. Even when a off note sounds—the plodding sauce on the glistening noodles in their pad Thai—something will call out to save the moment.

In a few weeks, Anong’s will shake off its opening month service jitters. When the front of the house aligns with the kitchen, the Cheyenne location should become as renowned as those in Laramie and Rawlins.