Recent theatre performance was the "best in my time here" 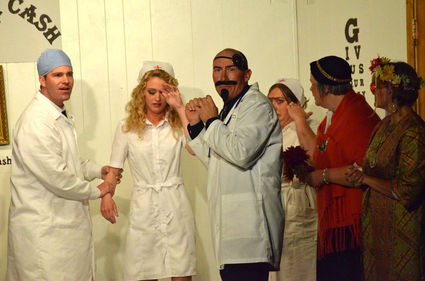 Dr. Dogsbreath Devereaux (center) played by Tom O’Brien is surrounding by other characters in this gripping, comical performance that took place recently.

The production, directed by Tom O’Brien, was put on in the Plains Historical Society Museum in front of a packed house of local

“The Dastardly Doctor Devereaux” takes place in the emergency room of the Hanover D. Cash Clinic where Dr. Dogsbreath Devereaux, played by O’Brien, and his accomplice Nurse Hilda Hatchett, played by Aida Williams, are scheming to take over the clinic from the widowed Lotta Cash, played by Jenn Dillinger. However, the arrival of Nurse Wendy March, played by Riyatta Frye, throws a kink in their plans with her ensuing romance with Dr. Phil Good, played by Josh Enevoldsen, and friendship with Nurse Ivy Dripp, played by Tonia Gamblin, creating a plot of epic proportions.

The production is laced with enjoyable gags ranging from the constant reprisal of March’s introduction song and Nurse Ivy Dripp constantly taking figurative language literally to the laughable puns by character Officer Tommy Gunn, played by Dan Laughlin, and a musical dance number featuring Trixie St. James, played by Tiffani Dea, and her chorus girls which left residents no longer having to wonder what Kimball Longhorns basketball player Mike Daum would look like in drag, which was surprisingly feminine by the way.

Though the melodrama was done in a very tongue in cheek manner, it highlighted the abilities of the many talented performers that we have right here in Kimball.

O’Brien, of course, was wonderful as always playing the villainous Dr. Devereaux with perfected comic timing and being able to interact with the crowd as they threw ‘villain balls’ at him without skipping a beat.

Frye simply blew the audience away with her extraordinarily stunning singing voice, and the charming way in which she played the idealistic Wendy March, even somehow making the gag of singing the same introduction ad nauseam throughout the production enjoyable rather than having it fall flat with time.

Williams was at times both hilarious and terrifying in her turn as Nurse Hilda Hatchet. Quite simply, her number explaining her unusual name and the voice Williams used to mimic a younger version of the character is perhaps the funniest thing I’ve experienced in any production I’ve seen.

Enevoldson also gave a great turn as Dr. Phil Good, especially as his character was at the center of many of the melodrama’s musical numbers which switched back and forth between several different musical styles, with Enevoldson’s Elvis impression being my personal favorite.

Gamblin, though her character was rather simple, perhaps got the most laughs out of the crowd while delving herself into every gag as her character constantly mistook figurative language for literal language putting her head on desks, standing on desks, and just simply watching one of our local educators acting far below her intelligence level was delightfully funny.

The supporting cast also gave great performances as the patients of the emergency room with characters names such as ‘O. I. Hurt’, which particularly stood out in my mind as it lent itself to mimicking an old Abbott and Costello gag.

The book and lyrics were by Billy St. John with the music by Debbie Wilson for the production. Of course, the production would have been nothing without pianist Lisa Delhay who lent her skilled hands to the performance.

For my money, the performance is the best that has been put on in Kimball by any theater group in the time that I’ve been there, and I sincerely hope that a majority of the local residents were able to get out and enjoy it.