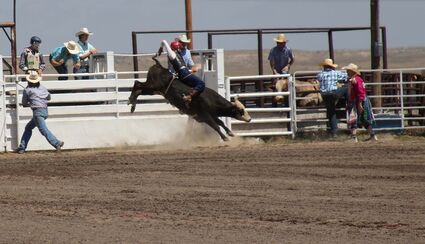 River Mossberg is on his way to a winning bull ride at the Trail Days Rodeo in Pine Bluffs.

After being stepped on by a bull and suffering a broken femur (thigh bone) in January, River Mossberg staged a comeback and received a winning score of 87 on his ride at Pine Bluffs Trail Days Rodeo.

His dad, former Kimball County Commissioner Brandon Mossberg, said River has "only been on a handful of bulls since" his accident.

After winning Pine Bluffs, River travelled to Kiowa, Colo., and won the bull riding at that rodeo.

River has completed his high school bull riding as he graduated as a junior from Central High School in Cheyenne.

According to Brandon, River is headed to Jackson Hole, Wyo., to guide elk hunters.

Cody Brinkman, another up and coming bull rider from this area, also participated in the Pine Bluffs Trail Days Rodeo.

Cody will be a sophomore at Kimball High School and has been riding bulls throughout the summer.

Cody will start the fall season of the Nebraska high school rodeo in a week, Amanda Bradney said.