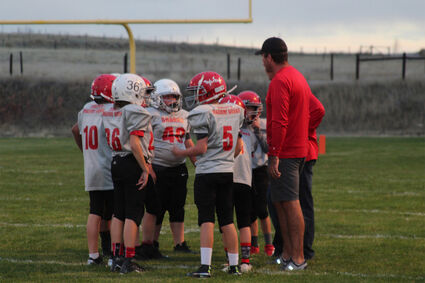 The fifth- and sixth-graders on the Kimball Sharks huddle up with Coach Trevor Anderson before the start of the homecoming game against the Pine Bluffs Hornets.

Kimball's homecoming game between the Kimball Sharks and the Pine Bluffs Hornets was Friday evening.

The fifth- and sixth-graders played the first half while the third- and fourth-graders completed the second half. The Hornets outpaced the Sharks by a score of 36-0 – but 27 young football players got to play under the lights and excitement of a game with lots of spectators.

The coaches for the Kimball Sharks were Trevor Anderson, Adrain Fuss, Mitch Brown and Brad Hottell.

Anderson told the Observer: "The Sharks football teams were fortunate this year to have a great group of boys that have worked hard at every practice and gotten better throughout the season. I am excited to watch them continue to grow and improve in the years ahead as they have been very fun to coach!"