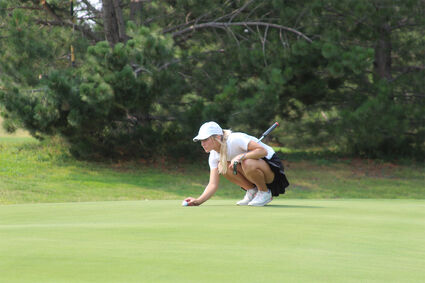 Katie Heeg lines up her putt on the tough number 8 green Tuesday at Four Winds during the Kimball Invite.

Payton Wise and Katie Heeg are making a name for the Longhorns as they placed first and second on their home course. The Kimball Invite was the third meet of the season, and both Wise and Heeg have brought medals home at each meet to date.

Katie said she struggled with her driver, but then she recently got new graphite clubs, which are much lighter. Number 13 was her lucky hole as she almost had a birdie, but the putt lipped out. She said the greens were so fast, "I didn't putt great, but I putted decent."

According to Payton, "The first nine was very rough, I started with a 9 on the first hole but came back with a par and brought it all together to shoot 2 over on the back side for an 83."

Eleven schools participated in the Bayard Invite, and the Western Trail Conference meet. The Kimball girls rocked the course, with Payton Wise winning the meet with a 41-43=84 and Katie Heeg taking third place with a 45-51=96. Kimball was unable to compete as a team because Payton and Katie are the only two golfers currently participating. In team standings, Mitchell won the meet with 409, and Chadron placed second with 449.

Sidney hosted the first meet of the season, where Longhorn Payton Wise shot a 41-40=81 to take fourth place, just seven strokes off of first place. Katie Heeg racked up 10th place with a 51-53-104.

On Sept. 2, Katie and Payton will travel to Chappell to compete in the Chappell Invite.