Catching Up With The Guys At Vince's Scramble 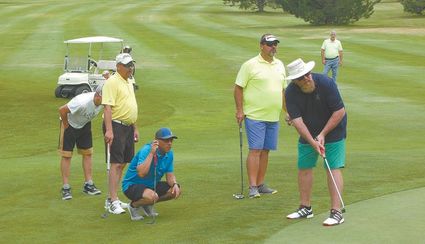 Vince Heeg and his scramble team watch the role of his putt during play in the Vince's Corner 2020 Double Draw Scramble. Don't miss next week's Observer for more photos from the big tournament.

What a Great weekend of watching some outstanding golf! I put in several hours following golfers involved in the 11th annual Vince's Corner ABCD Double Draw Scramble out at the Four Winds Golf Course, breathing good fresh, Hot air, but finding lots of shady spots where I could watch golfers come in and go out, with lots of exciting approach shots, pets, and long drives.

On top of that I got to see and talk with a lot of people I haven't seen since at least last year, or longer. Many good friends from out of the past. I know we are supposed to do the imaginary hugs and fist bumps etc., but wow, I got a lot of real hugs and lots of kind words about my recent Golden Pica Pole honors from the Nebraska Press Association, thanks to the nomination of the Observer publisher Jim Orr.

And while I am at it, I want to take this space to thank Jim for bringing it to the attention of those in charge that I have been doing this, in some fashion, since 1964, and thanks for all of the many calls, cards and kind words from all of you great friends. I have been blessed with good health that allowed me to stick around this long and do something I enjoy doing.

Now back to the weekend. I had a few golfers arguing over who I should give Athlete of the Week to. Yeah Dave Mann, you are in the running with that snaky - or 35 - putt you drained on number 9 on Saturday. It was almost unbelievable but then back in his high school days I saw Dave do some pretty awesome things during his athletic endeavors for Kimball High.

I told Dave, who flew in from Phoenix as he does every year, along with his son Cody, "There you are showing off again." and his response was, "Just like the old days, huh Tom."

Dave was saying, "You better not give it to Vince (Heeg) for that short little putt he made."

Gary Monson, who coached boys basketball many years ago at Bushnell (and they had good basketball, I might add) drove in from Benkleman, where he lives and is still working in the banking field. He said, "If Mann is in the running, I better get some ink too." Was great to see , Gary, and share some time.

Michael Plate, a banker in Alma, Nebraska, and a former Kimball standout athlete, was back, and this young man spent several years pursuing that golf game professionally. He looks, and still plays, great.

The three Staehr brothers all played and when the field of entries was filled, Keith, the dad of these three fine young men, gave up his spot to make sure Jon could have a spot along with Jay and Joel.

The Ferguson brothers, Kendall and Charles, had a great tournament as you will note in the results story. Scott Sterling drove in from Hastings like he does every year.

How about the Stafford guys? Mike, the dad, is married to the former Ginny Heeg, and they live down in the Denver area. Mike was the top C golfer. His oldest son Jack, is a senior in high school and finished fourth in the A golfers division. His other son, Tyler, was the top D golfer. Wow, what a year for the Stafford family!

I was amazed at how many of our former Kimball High golfers were listed as A golfers. Starting with Andrew Brown, who won the top honor this year. Kendall Ferguson, who was runner-up, and Jeff Greenwood, Pete Andersen, Henry Heeg Jr., Ty Garrett, the Robinson family, including Tony and Michael, and he's not an A golfer anymore but dad Greg who has dropped down to B division as he ages.

Then there are Michael Plate, Donny Peterson, and Dillon Wise, who is still involved with his collegiate golf career. Shane Hays was not a high school golfer, but was a great athlete for Kimball High, and now he is also an A golfer.

Chuck Christiansen golfed many years back for Kimball High and has some professional golf years, in fact a lot, as a Pro who ran golf courses and gave instruction, has had some shoulder problems and he dropped down to class B this year. Zane Anthony, another recent standout for Kimball High was a B player, and Dad Lynn also. Jim Eddington who really was one of Kimball High's top basketball players, was here with two sons.

John Soto from Cheyenne and I had some talk, and the list goes on and on. Nick Kuxhausen who coached at Kimball High for a few years before moving back to his old alumni at Mitchell to do some teaching/coaching there was an A player,  and his Dad, Kirk, also on staff at Mitchell, were in the field, and Rob Jackson was another player who used to live here in Kimball, but now lives up Mitchell way.

Kevin Thomas, who lives in Potter but golfs almost daily at Kimball, and is one of the best, was another a player and I get to enjoy watching him a lot. I always spend time exchanging caustic remarks with Gary Haack who had a good tournament and will be telling me about it next time we play. Yes Sir... it was a fun weekend. Now what?

The now-what is the cross country Glo Ball Tournament this Saturday evening,  July 18th at the Four Winds. I hear the field is already filled, and Four Winds Pro Chad Wise said there is a need for golf carts, so anyone who might loan one out, please call him at the Pro Shop.

This is a fun-filled tournament for the local Mason chapter to raise money for a good cause and Kevin Wynne heads it up. It is a 4-person scramble with the first 9 holes played in daylight, then a pause to enjoy great food by Dave Klinkhammer, then 9 more holes in the dark. Like I said, I have heard it might be filled but you can always check with Chad at the Pro Shop.

Things are loosening up for the Nebraska High School athletes, and Kimball High girls basketball coach Jaclyn Burks took some girls to a basketball camp at Broken Bow this past week and got some action.

Kimball High volleyball coach Jeri Ferguson is taking 13 girls to a volleyball camp at Seward this week. Kimball High boys basketball coach Chad Miller told me he is having trouble just getting many kids to turn out for the local gym nights and extends an invitation to any and all boys who might be interested in playing to give him a call or just show up.