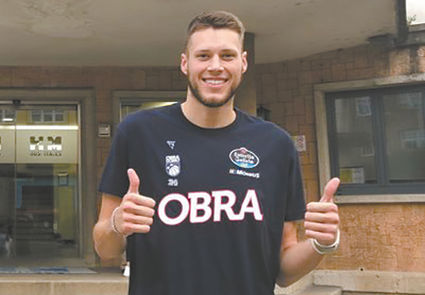 Kimball basketball legend Mike Daum was seeing some time as sixth man and a starter on the Monbus Obradoiro pro team in Spain before the coronavirus shut down his league. He's been waiting it out in his apartment.

Mike Daum is another outstanding Kimball High grad who, like Adam Bohac (see "Jock Talk" in this week's paper), set many Kimball High School records and excelled in the game of basketball.

He went on to set many South Dakota State University scoring records and is now playing professionally in Spain, or should I be saying, was?

Basketball is shut down in Spain because of the coronavirus scare, and Big Mike is sitting it out in his apartment waiting to see if the League is going to try and continue, or if it is done for the year. According to his mother he should know within the next couple of weeks.

Mike's parents, Michele and Mitch, would like to see their son back in the United States if the season is over, and before they shut down all flights out of Spain.

Mike went into quarantine and complete lockdown as of March 13, so he is just staying in his apartment and getting food from the restaurant right next door.

Michele said, "Mike is fine, and is being cared for and taken care of in good fashion by his team owners. He is well cared for."

Mike has been quite happy with his coaches and teammates and would be quite content to play for them again next season.

Big Mike has seen his professional career start off a lot like his college career did in that he started slow but gained more playing time as the coaches realized just what he could bring to the table. At this time he has seen some starting roles and has played as the sixth man some.

Mom said, "I am going to have to get on him about the free throw shooting because he has always been better than that."

So now it is a wait and see for a couple of weeks and then if the season is called, hopefully Mike can still get a flight back to the States and get to work with his trainer and agent to keep his game where he wants it, and see what happens next.

From myself, and all of your many other fans Mike, stay safe and healthy.