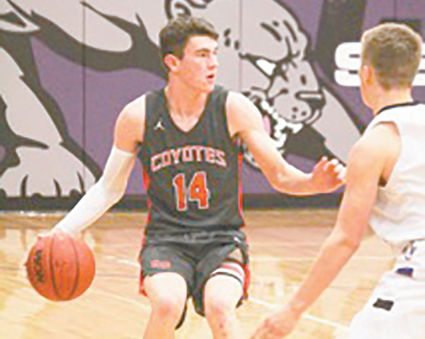 Potter-Dix freshman Luke Kasten was the offensive spark for the Coyote team this year, and he looks to lead the team to success in the coming years at Potter-Dix.

Potter-Dix was paired against the Arthur County Wolves on Feb. 24 to start the D2-11 Subdistrict Tournament in Ogallala, and the Wolves team that had struggled all season with just two wins gave the Coyotes a contest.

Arthur County's Bryce Hanna dropped two three pointers in the first quarter to keep the Wolves close, and Arthur County led 16-to-14 at the end of the first quarter. The second quarter had the teams battling, with Potter-Dix falling further behind to start the quarter, then catching up as the period progressed.

But the Wolves kept fighting back, and held off the Coyote's cha...