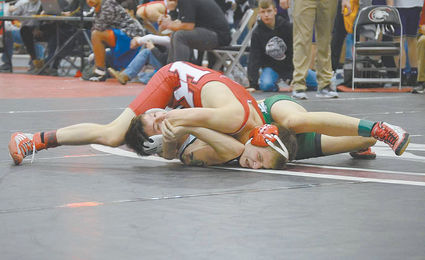 Longhorn Connor Cluff was all-in during the Chadron tournament, going 4-1 before being stopped from competing further due to the state limit for high school wrestlers of no more than five matches in one day.

Connor Cluff at 126 pounds was Kimball's top wrestler at the Chadron Invitational Tournament this past Saturday with a record of 4 wins and 1 loss, and finishing 4th in his class.

Cluff might have placed even higher but had an unfortunate situation, according to Coach Wade Brashear.

"We had some up and downs at the Chadron Invite," the coach said. "Connor Cluff was our top placer and placed 4th because he had to have a no-contest match in the consolation finals, as a high school...