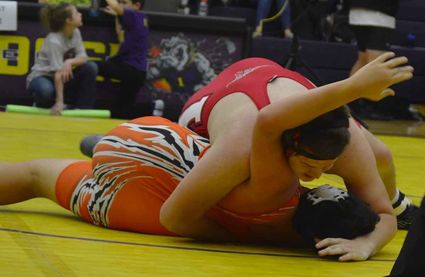 Laura Batemen / For The Observer

Kimball's Stephen Bateman, on top and in command, made a case for his State bid with three wins by fall in the Bridgeport/Sidney Invitational.

Just one final 2019 Kimball High sporting event to report this week, and that is how Kimball fared at the Bridgeport/Sidney wrestling invite at Bridgeport.

There were some positives and some negatives from this event as described by coach Wade Brashear.

"Two of our wrestlers ended their day early with Joe Burris at 152 pounds suffering an ankle injury the night before, and he was only able to wrestle one match," Brashear said. "Ilian Serrano at 145 JV suffered a knee injury in a victory and was not able to continue.