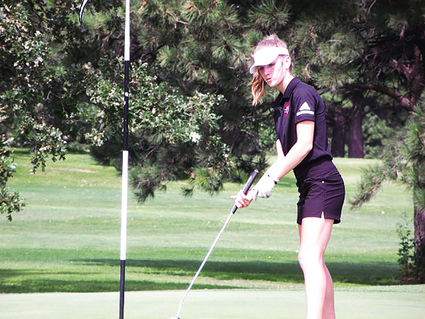 Kimball's Katie Heeg shot personal best-round scores of 107, back to back this past week at the Ogallala and Bridgeport golf tournaments, as the young sophomore in her first season with the sport, continues to improve with her game.

The Kimball High girls golf team played in their final two tournaments this past week as they have only their District Tournament play remaining and hopefully a qualification for the State Tournament. In their final two warm up, and regular season tournaments, they had a sad appearance, and then another very good showing.

The not-so-good showing was at the Ogallala Tournament on a Tuesday where the Kimball ladies failed to place a single golfer in the top medal group. It took a round of 92 to make the top 15 and Payton

Wise shot Kimball's low round of 96. Maddie Cook shot 121 and on a bright note, Katie Heeg shot her personal best round of the season with a 107. Playing with only 3 golfers they were not eligible for a team score.

It was a large field of teams and golfers, with many large Class B schools involved. Baylee Steele of North Platte shot the low individual score of 73 and teammate Karsen Morrison was runnerup with 75 to lead North Platte to the team title score of 332. Scottsbluff and Gering had good showings finishing in the number two and three postions.

Two days later at the Bridgeport Tournament, the Kimball girls had a good showing in their final warmup going into District. Still playing with just the 3 girls as Carli Wurdeman was out with a broken finger, Payton Wise won the individual top honor with her round of 47-41=88 to take medalist honors.

Katie Heeg matched her best career round she shot at Ogallala with another round of 107 to finish in 5th place, and Maddie Cook was just 2 strokes behind Heeg with a round of 109 to take 6th place honors. A good day for the Kimball girls.

Mitchell won the team title with the 419 followed by Gordon/Rushville with 490, Bridgeport 532, and Perkins County 561.

Coach Katie Culek, commenting on last week's play, said, "We just had a rough day at Ogallala. It was pretty windy and that didn't help. I was proud of Katie Heeg for her play and she continues to get better and her best golf is certainly ahead of her. Payton came back strong and Maddie Cook had a good day at Bridgeport. Happy to see al 3 of our girls bring home top ten medals."

As the scores indicate, Heeg's shoulder problems seem to be alright now. The big question is whether Carli Wurdeman will be able to compete again and that question was to be answered yesterday (Wednesday) when she saw her doctor again.

The District Tournament the Kimball girls will be involved in will be held at McCook on October 8. "We will now turn our attention to some solid practice sessions this week, and right up until District play," Coach Culek said.