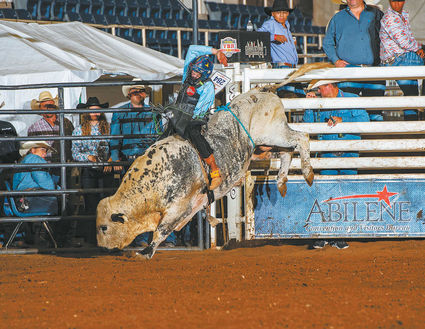 Most kids at 15 years of age don't really know what they want to do, but River Mossberg absolutely knows.

River, the son of Kim Freeman of Cheyenne and Brandon Mossberg of Kimball, rode miniature bulls in the PRCA sanctioned rodeo at the Kimball-Banner County Fair and Rodeo.

River got his start at his dad's place right here in Kimball. At 10 years old, River would jump on his dad's roping steers and ride them. With roping steers under his belt, he attended a bull riding school and from there he never stopped.

He credits Jed Moore with teaching him the proper fundamentals and technique to be successful in bull riding.

Training for bull riding is more in depth than one would think.

"I work out, I have a barrel and made it to buck like a bull," he said. "I work on my basics and fundamentals."

Just starting his freshman year at Central High School in Cheyenne, River will be riding bulls for the high school rodeo team and is extremely excited about it. High school rodeo has a fall series and also a longer spring series in Wyoming.

The high school rodeo finals will be held in Lincoln this year.

River has already made it big in the miniature bull arena, as he won the Greeley Stamped,the Double Bar G Bulls and Barrels three times (Laramie County Fair), received second at Cheyenne Frontier Days, and finished eighth at the World Finals in Abilene, Texas.

River said riding bulls is his "favorite thing to do" and replied that all he thinks about when riding is "stay on."

Injuries are just a part of the sport and River has had his share-one especially bad injury, when a bull stepped on his head, even though he was wearing a helmet, he still sustained a brain bleed.

River is already looking forward to his 18th birthday, when he will be able to obtain his pro rodeo card and ride bulls professionally.