Anthony Kuhns filled his Nebraska fire arm deer permit with this big 4x4 mule deer buck and was one of the 247 deer checked in at the Kimball check in station, located at Sportsmans Liquor in Kimball. For more photos and information, turn to page 10 in this week's Observer.

According to the Nebraska Game and Parks Commissioner, preliminary deer harvest in Nebraska is 5 percent behind last year’s pace. From Sept. 1 through Nov. 26, there were 47,532 deer checked, compared to 49,923 in 2017.

Whitetail buck harvest is up slightly, with 26,525 adult whitetail bucks harvested compared to 25,489 in 2017. The average age of bucks also increased, with 41 percent of whitetail bucks estimated at age 3 or older.

Biologists also collected lymph nodes for chronic wasting disease (CWD) testing from more than 1,500 deer in Panhandle and north-central units. Results should be available by the end of December. Game and Parks will only notify a hunter if his or her deer tested positive for CWD.

Hunters are reminded that mule deer does are protected in many management units and public lands across the state. Refer to the 2018 Big Game Guide for details.

Hunters who wish to donate venison can use the Hunters Helping the Hungry and Deer Exchange programs. Go to OutdoorNebraska.org for more details. 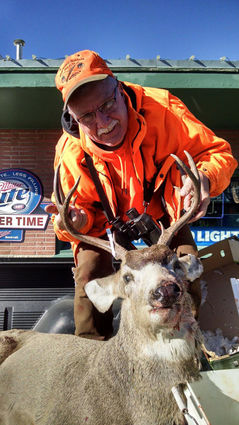