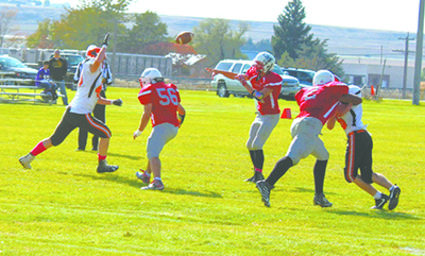 Potter-Dix quarterback Dylan Nielsen fires one off, but right into the hands of a Cody Kilgore opponent.

Cody-Kilgore showed up to play last Friday against the Potter-Dix Coyotes, and ended the night with a 63-8 win.

The Cowboy's held the Coyotes scoreless until the second quarter but also added to their demanding lead even after first period play. At the conclusion of the first half it was the Cowboys up 56-8, with 34 of those points for Cody-Kilgore being scored in the second quarter of the game.

The second half the Coyotes were able to keep the Cowboys to one more score, but not being able to put any more points on the score board for themselves, making the final score of the game 63-8 wi...