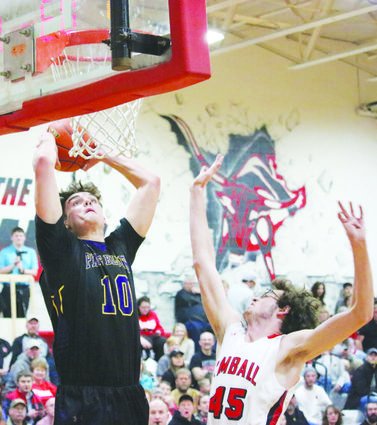 Hunter Thompson, left, led the Pine Bluffs Hornets in a win against the Longhorns and brought the visiting team's record to 18-0 this season, though the Kimball boys fought hard. Shown here, Kimball's Edward Barnes attempts to block Thompson's shot at the basket.

Hunter Thompson and the Pine Bluffs boys put on a show to behold in winning over Kimball this past week 86-41. The defending state champs, ran their undefeated season record to 18-0 with the win and Thompson, the 6'10" super-star, who is headed to the University of Wyoming after he finishes out his senior year at Pine, gave the fans a look at what a Division One recruit can do.

Thompson was 6 for 6 on 3 point attempts in the first quarter alone and made the crowd roar with approval on a couple of slam dunks as he tallied 25 1st period points in leading the Hornets to a 40-1 first quarter l...