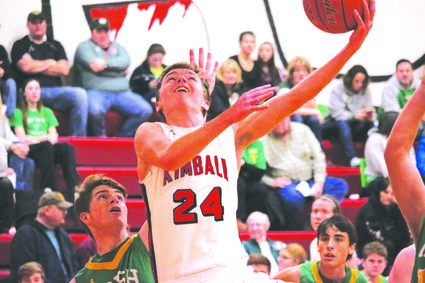 The Kimball boys added two more wins to their basketball season to run their record to 11-3 going into this week's play. The Longhorns travelled to Sutherland Friday night and brought home a 60-44 victory then hung on for a 65-61 win over visiting North Platte St. Pats Saturday night.

The Horns busted out to a 28-15 first quarter lead at Sutherland and coasted in for the win with eight players scoring for the winners.

Jordan Greenwood was just shy of his season average in leading Kimball with 18 points including one trey and 5/7 foul shooting. He had an all around good showing with four reb...