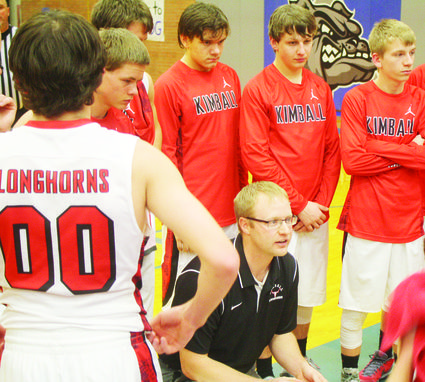 Coach Luke Dea, kneeling, guides the Longhorns during their game against Chadron last week. The reserve crew is pictured behind Coach Dea.

The Kimball High Boys saw their basketball season come to a close with a 56-34 first round loss to Chadron in sub-district Tournament play at Alliance this past week. The Horns were unable to get anything going in one of their worst shooting nights of the season. The Horns shot 13/52 from the field for 25%, going 7/24 on 2 pointers and just 6/28 on 3 point attempts. They shot only 4 free throws on the night making 2.

In other team stats, they pulled 20 rebounds with 8 offensive and 12 defensive, just 6 behind the winners, had 8 steals and 9 assists. No one in double figure scoring for Kimb...