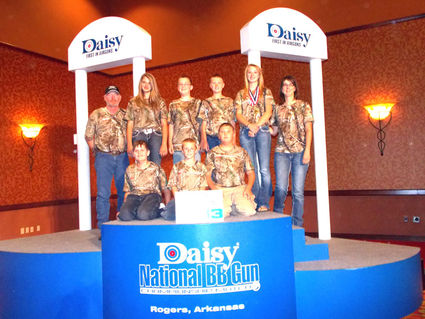 The Dead Eye Shooters made an impressive showing at the Daisy National BB gun and Air Rifle competition in Rogers, Arkansas this past week, coming back home to Kimball with 11 medals.

“I thought they went fantastic. I was really, really proud of the kids,” Dead Eye Shooters Coach Nicole Snyder said.

The group started the journey to Rogers on Wednesday, June 26, arriving at the Convention Center where the competition was to take place on the Friday where they checked in their equipment and were given a tour of the Daisy Factory and museum.

Matches started early on Saturday. Although an early morning start would leave most people sluggish, it appears that it did not affect the kids at all, especially not Dead Eye’s Madie

Snyder who walked away from the first round with a 100 in the prone position for the BB gun portion of the competition hitting the center of the target six times.

However, Madie wasn’t the only one who walked away from the competition with a reason to hold her head high as the Dead Eye’s youngest member Hunter Boydston, who had previously said that he couldn’t hit the broad side of a barn before joining the Dead Eye Shooters, also achieved his personal best.

“He broke a 300 finally so he was pretty excited about that,” Nicole said.

For the BB gun portion of the competition, the group ranked 37 overall with a total of 2183 in the competition with Shauntae Daily, Jaren Winstrom, Brody Copeland, Madie Snyder, and Taylor Terrill participating.

“They shot right around their averages. I think they were a little nervous when it came to BB gun. They were right there in that middle range doing really well,” Nicole said.

According to Nicole, the four kids that participated in the sportier air rifle portion of the competition really stepped up to the challenge.

“They kind of turned it on for the air rifle portion. We were just ecstatic with how well they did. They did phenomenal. Larry and I were so proud of them that we could have just busted,” Nicole said.

For the air rifle portion, the team placed 3rd in their age division with Shauntae winning her age division and placing in the top three in all three positions. Jaren placed 2nd in the standing position and received 4th place in his age division.

Madie once again shot well for her part in the competition, placing 5th overall in all the age divions, 2nd in her age division, winning in the kneeling position, and coming second in prone and standing. She also got the opportunity to experience her first finals at the competition.

“Finals is at the end of the competition. They take the top eight kids, no matter what age group they fall in, and they line them up and have them shoot a standing target one shot at a time reporting what they get on each shot. So it’s kind of a pressure cooker,” Nicole said.

However, the group’s time in Rogers was not just business as they were given enough down time to be able to participate in team activities outside of the competition.

“One of the things that Daisy provided us, because there is some down time while you’re in Rogers, was passes to a place called Fast Lane. We rode go carts and played laser tag and I think some of the kids even did some bowling and miniature golf,” Nicole said.

This goes to show that the Dead Eye Shooters are not only about shooting well at competitions, but a very important part of their group is the bonding that the kids and adults experience at each event.

“We do a lot of fundraising, and we do that so that parents are able to travel with their kids to the competition so they can be a part of it. A lot of the time the parents coach their own kids. We like to do a lot of things together as a team. That’s how you build a team is to do things together,” Nicole said.

Though Nicole would like to be able to take the Dead Eye Shooters back to Rogers next year, the same group can not participate in the Daisy competition two years in a row and will have to wait another year before returning, unless another group of kids join the Dead Eye Shooters.

“If we qualify a team this next spring at the state competition, it will have to be seven other kids. Of course, we’d love to take another team. We’d love to get some kids going and started and this fall when we get going with BB gun and have another team to go to Rogers next year,”Nicole said.