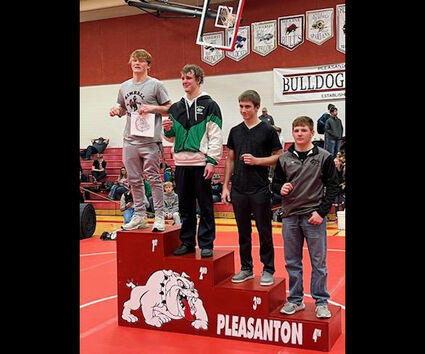 Trey Schindler, left photo, placed first and James McGinnis, right photo, finished second at the Pleasanton Invitational. Kimball added the tournament to its schedule after losing the Sutherland tournament due to the blizzard.

The Longhorns wrestling team is looking competitive heading into its next action on Saturday, Jan. 7, at the always solid Garden County Invitational.

The Longhorns competed on Dec 30 at the Pleasanton Invitational. This was a tournament that was added to the schedule due to the blizzard that cancelled the Sutherland tournament for the Longhorns. The tournament featured 25 teams from Northeast and Central Nebraska, including two JV teams from Class A Kearney High School.

The Longhorns came to wrestle after not competing since Dec 10, placing seventh out of 25 schools with 71.5 points.

The Longhorns were led by Trey Schindler's championship at 152. Trey scored three falls on the day to get to the championship match. He won a very exciting finals match, 9-8, over a solid wrestler from Wisner-Pilger.

Cody Brinkman placed first in the 132 B bracket. He pinned a wrestler from Perkins County in his first match. He won an exciting match over a Twin Loup wrestler by a major decision, 18-9.

Matthew Johnson saw his first action of the season at 106. He came out with two pins and a major decision to get to the championship match. He was pinned in the finals by a Class A wrestler from Kearney High School. 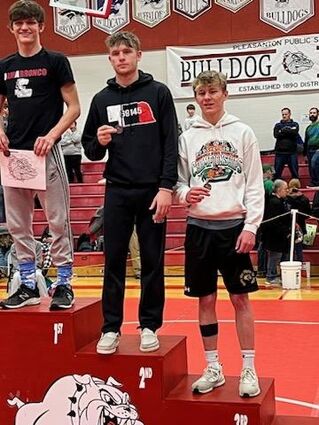 James McGinnis saw his first action at 132 for the season with a runner-up finish. He scored two pins and a major decision to get to the championship. He lost by technical fall to last year's state runner-up from Kenesaw High School to finish in the runner-up position.

Derek Kauffman wrestled some very competitive matches against very tough competition at 170. He went 1-2 on the day. He won one match by pin. He lost against a one-loss wrestler from Ravenna ,7-0. His second loss on the day was in overtime, 5-3, to a Class A wrestler from Kearney High. Derek will hopefully be able to drop to 160 in the next 2 weeks, which would make him a force to be reckoned with moving forward.