Both Schools Next In Action Jan. 3 – South Platte At Horns, Coyotes At Grant 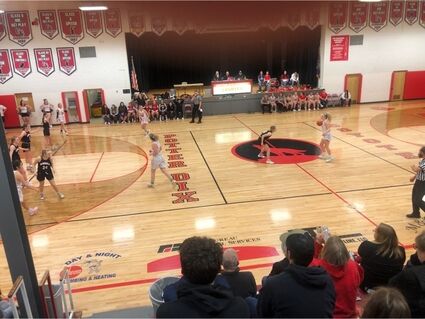 Kimball looks to move the ball up court in Monday's clash with host Potter-Dix. Longhorns varsity and JV basketball teams will next be in action in 2023 – when they host South Platte on Jan. 3

After a week filled with cancellations of games due to the recent snowstorm that blasted through the Panhandle, the Potter-Dix Lady Coyotes and Kimball Lady Longhorns finally got back on the court Monday night at Kimball High School.

The Lady Coyotes have struggled a bit to start the season, earning one win against three losses. The Lady Longhorns are in the season of growing young players and have no wins in five games so far.

The first quarter of the game featured tough defensive play by both teams, with the Lady Coyotes pressuring the Lady Longhorns, causing turnovers and preventing any good shot opportunities.

The first quarter ended with the Lady Longhorns going scoreless, while the Lady Coyotes were able to put up four points.

The second quarter had Potter-Dix get into a rhythm on offense, moving the ball well and getting good looks while putting up 12 points in the period and limiting the Kimball squad to just four points

The second half again featured tough defense, but the Potter-Dix girls were able to put up 8 points against the Kimball girls' 3 to increase their lead to 24-7. The final period had Kimball score a bit more, getting 10 points against the Lady Coyotes' 9, ending the game in a 33-17 Lady Coyote victory. Potter-Dix moved to 2-3 on the season while Kimball remains winless at 0-6.

Kimball juniors Grace Anderson and Julia Winstrom each had six points in the loss.

Potter-Dix is next scheduled to travel to Grant to match up against Perkins County on Jan. 3, while Kimball will host South Platte on Jan. 3.