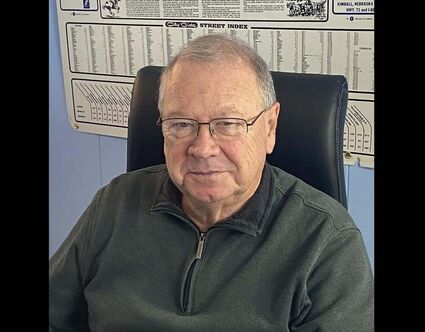 Kimball Mayor-elect John Morrison sits at his office desk at High Point RV Park, one of his businesses on Highway 71 near I-80.

The City of Kimball Mayor-elect John Morrison will take the mayoral reins on Dec. 6 at the next City Council meeting.

Morrison said, "I want to see Kimball prosper, and it is going to take everyone that wants to help in town to do it. I can't do it by myself. It will take many, many people working together to get us to where we need to go."

He confided in the Observer interview that he is excited about the opportunity but is a bit overwhelmed. He is in the process of gathering ideas and prioritizing his ideas and goals.

The mayor is the "face of the city," and only the city administrator and the chief of police report to the mayor. The mayor appoints all board members and committee members and, of course, runs the city council meetings.

Morrison has a long-term goal of promoting growth and eventually taking the city to a population of 5,000 people.

"Within two years, we need a minimum of 50 new homes, which is pretty ambitious," he said.

Other goals include cleaning up properties, adding some retail stores, creating some recreational opportunities and, he said, "We have to rebuild the infrastructure. We have ignored our infrastructure, and it has become very dated. Unfortunately, everything needs fixing. We need to be looking at sewers downtown, especially all the older sewers and the older waterlines.

"We haven't replaced a street in 33 years that I have been here. The wastewater treatment plant, luckily, is adequate, but it is not up-to-date. The government keeps raising the standards."

In addition, Morrison said he feels there is a need for generators and an updated transformer.

As for finances, Morrison said, "We may have to (use bonds). I don't think we will have to raise taxes only because valuations are going to go up, and if we can build some more houses, we will have more value in this town. So I am not too worried about raising taxes.

Using the example of needing a sewer line out to the old Castronics property, he said, "If we can't figure out a way to do it, we may have to bond. We need to get it done."

Morrison thinks it is essential to get some residential and commercial properties cleaned up because when new people come to town, "that is what they see" – the unkept properties.

Morrison said, "If there is a piece of property there, it should be inhabitable."

Morrison said that the city would need to take the "fullest advantage" of the growth in the next few years.

"Now is the time to take advantage of the growth," he said. "There isn't a city in the state, except maybe Omaha, that wouldn't love to be in our position."

Morrison said he hopes to provide leadership for Kimball and a vision for the future.