25 Kimball Ferals Gets Spayed Or Neutered In Fort Collins, Then Come Back 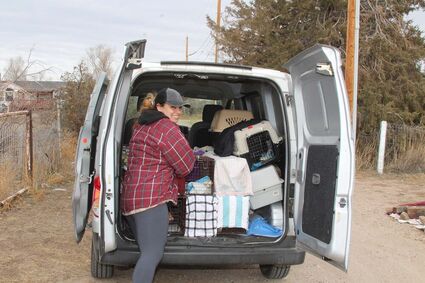 Hannah Knox, a volunteer from Northern Colorado Friends of Ferals, prepares to release 25 cats Monday after they were spayed or neutered, vaccinated and returned from their trip to Fort Collins. Below: Cats make the rounds Saturday night before being trapped and fixed.

After a weekend trip to Fort Collins, 25 Kimball cats and kittens have been returned to their colony. The cats were trapped on Saturday evening. Sunday is clinic day in Fort Collins, where they were spayed/neutered and vaccinated by four volunteer veterinarians and a host of other volunteers.

Monday morning, the cats were returned to Kimball – all with volunteer labor.

Trapping in Nebraska was a first for the Northern Colorado Friends of Ferals.

Hannah Knox and Katie Evans, both volunteers, spent their Saturday night trapping cats from dusk until about 8:30 p.m. on a frigid evening.

Both Hannah and Katie are students at CSU.

Hannah has volunteered at Northern Colorado Friends of Ferals for the past four years. She is in her master's program and hopes to study cat behavior. Katie is an undergraduate and has volunteered for two years.

According to Hannah, feral cats are a problem nationwide, especially in rural areas because there isn't a lot of vet care in general and these areas are "super underserved." In addition, there are not many low-cost spay or neuter options.

An eartip in the left ear is the universal symbol to let people know that a cat has been spayed/neutered and vaccinated and they will not be trapped or have surgery again.

According to Leslie Vogt, director of No Co Ferals, many rural areas have no resources, no shelters, and no educational programs to help.

On Sunday, 123 cats from various places went through the clinic, but since the facility's creation 14 years ago they have treated about 12,000 cats.

Kimball is not alone in dealing with the feral cat problem. In 2014, 750 feral cats were trapped and treated from Sterling, Colorado.

Until now, No Co Friends of Ferals has mainly operated in Colorado towns, Greeley, Eaton, Evans, Wiggins, Brush and Hillrose, but they have also trapped cats in Cheyenne.

According to Hannah, the secret to trapping the cats is to "ask the caretakers to not feed for two days in advance; that way, they are hungry and waiting, and it usually goes pretty quickly.

"We use weight-based traps. We put the food at the end and lure them in with a little bit of food. Once it goes off, we cover them and put them in the van. We also use wet food, which is super stinky, so they know it is time to eat, and they will go right in."