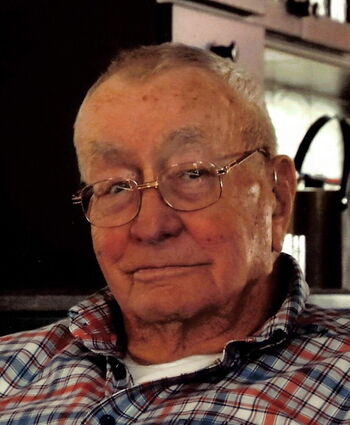 Lawrence Egging, 89, of Gurley passed away late Wednesday evening, October 26, 2022 at his home.

A Mass of Christian Burial will be held at 10:30 a.m. Thursday, November 3, 2022 at St. Patrick's Catholic Church with the Celebrant being Bishop Joseph G. Hanefeldt and Concelebrants being Fr. C.P. Varghese and Fr. Martin Egging along with the Priests of the Grand Island Diocese. Burial will follow in the Greenwood Cemetery with military honors provided by United States Army Honor Guard, V.F.W. Post #610, DAV Chapter #40, and the American Legion Post #17. A vigil-rosary will be held at 6:00 p.m. Wednesday evening at the church with a time of fellowship to follow.

A memorial has been established to St. Patrick's Catholic Church. Holechek-Bondegard Funeral Home and Cremations in Oshkosh and Chappell is serving the Egging family. Family and friends can leave condolences at http://www.bondegardfunerals.com.

Lawrence was born January 16, 1933, to Gerhard and Nellie (Rieken) Egging, immigrants from the Netherlands, in the same home he passed away in. He attended St. Patrick's Academy and graduated in 1952. Following graduation, he joined the military on June 9, 1954. When his father passed away, he was honorably discharged to come home and run the family farm with his mother.

He met Carolee Janicek of Kimball at his nephew's wedding and the two were married May 14, 1960. To this union 3 children were born: Martin, Carmen, and Kent. Lawrence spent over 40 years farming for the Goodwin family before retiring at the age of 81. During this time, he invented the "Soft Hammer," a lead filled hammer, and sold it to local farmers. Lawrence was a member of the Gurley School Board for 8-1/2 years and was part of the Gurley and Dalton consolidation in 1978.

He will be fondly remembered as an Ornery Dutchman who loved to tell stories, and nobody was off limits. Lawrence and Carolee loved to dance, especially the jitterbug, and attended many dances over the years. He also loved to farm, fish hunt, sketch and read. He would take the family to Lake McConaughy every Sunday where they would catch their limit, then water ski, but always fishing first.

He is survived by his children, Father Martin Egging of Grand Island, Carmen and husband Steve Draper of Dalton and son, Kent Egging and friend, Terry Loftus of Gurley; 1 granddaughter, Samantha and husband Keelan Halvorsen of Ketchikan, Alaska; brothers-in-law, Derald Janicek of Hot Springs, Arkansas and Duane and wife Fran Janicek of Kimball; a host of nieces, nephews, cousins, and friends.

Lawrence was preceded in death by his wife, Carolee, parents, 4 brothers, 5 sisters, and other family members and friends.