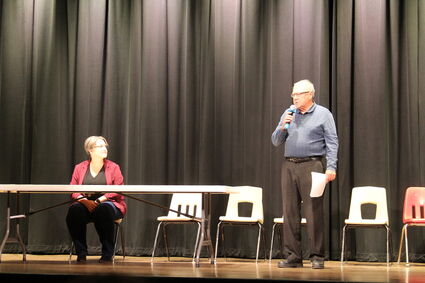 In the final event of the evening at Saturday's candidate forum at Kimball High School, the candidates in Kimball's interesting mayoral race responded to questions from the high school civics class. Above, Christy Warner sits while John Morrison takes his turn to address the audience.

State, county and city candidates were represented at the 2022 Political Forum on Saturday at Kimball High School..

The evening began with Alliance's Larry Bolinger as the first speaker at the forum sponsored by the KHS Class of 2023. Bolinger from the Legal Marijuana NOW party will face off against Republican Mike Hilgers on Nov. 8 for attorney general. Hilgers was not present at the forum.

The State Board of Education race is hotly contested, with incumbent Robin Stevens trying to keep his seat. Robin Stevens did not attend the forum, but his opponent Elizabeth Tegtmeier talked to area constituents about her views, most notably on the state health standards.

In the local races, candidates for Kimball school board, county commissioners, City Council and mayor were introduced and asked various questions.

School board hopefuls were asked about the most significant challenges facing the school district, whether or not the district was prepared for possible growth, and essential facility issues the district will need in the future.

School board candidates are Travis Cook, Tom O'Brien, Ken Smith, Jennifer Griebel, and Carrie Tabor. Voters will have three positions to fill for the four-year term.

In the city council race, Creg Pike is the lone name on the ballot, yet there are two positions to be filled. Write-in candidates are Kathy Porter and Don Muench. Questions presented to the council candidates dealt with upgrading the infrastructure and the need for a special election to increase the sale tax.

Three individuals are vying for two Kimball County Board of Commissioners seats. Candidates include Larry Engstrom, Elyse Schlake-Lukassen and Rich Flores. Their questions from the civics class included asking what the two top goals for the county are, preparations for the Air Force project, and what should the county's role be in supporting tourism.

Coming in next week's Observer: Area candidates in contested races for elected offices get the chance to answer the Observer's questions in a Q&A.