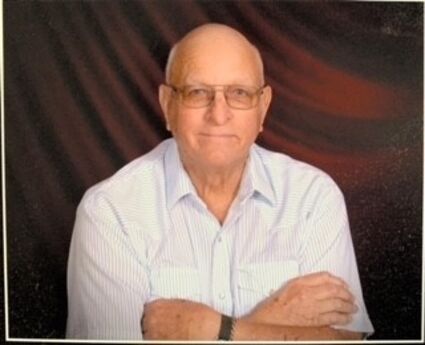 Val D. Snyder, 84, of Kimball, died at Kimball Health Services on August 30, 2022. Funeral services were planned for 10:00 a.m. on Tuesday, September 6, 2022 at Trinity United Methodist Church in Kimball with Pastor Alan Foutz and Pastor Craig Collins officiating. Burial followed in the Kimball Cemetery. Friends called at the funeral home on Monday from 1:00 until 4:00 p.m.

Friends are asked to visit http://www.cantrellfh.com to share condolences and stories with the family. Memorials may be given in his memory to the Trinity United Methodist Church or the Donor's Choice. The services for Val have been entrusted to the Cantrell Funeral Home.

Val Deane was born on July 1, 1938 to Glen "Shorty" Snyder and Roberta (Sweatt) Snyder in their home in Banner County, NE. He was the second son of four siblings. Val Deane attended grade school at Twin Tree School and then attended Harrisburg High School, where he played in the band, sang in the choir, and played football and basketball. He and three friends had their own country music band. He was the sports king at the sports banquet his senior year. He graduated in May of 1956.

He then married Kathleen Debus on August 25, 1957. They farmed for three years in Banner County, where their first son Val Dwayne was born. They then moved south of Kimball for about a year and half. Their second son, Robert Dean was born in Kimball at this time. Val Deane and Kay then moved north of Bushnell, NE and farmed there for nearly ten years. Their third son, Darrell Alan was also born in Kimball while they were in Bushnell. In 1970 they purchased the farm ground and house three miles north of Kimball on Highway 71 where he lived until his passing.

Val Deane was a big believer in his community. He volunteered as a leader in 4-H and drove the school bus for many years. He served on many local, county and state boards for nearly 25 years, including county commissioner. He was a member of Bushnell Lions Club, The Elks Lodge, and the Eagles. He was a member of the Trinity United Methodist Church in Kimball.

Val Deane retired in 2006. He and Kay traveled every winter to Yuma, AZ where they developed treasured friendships among the snowbirds from many states and Canada. He enjoyed being with people. Family reunions and school reunions were some of his favorite activities. Val Deane and Kay hosted a foreign exchange student, Karl Fahlbusch from Germany in 1978-79. The family went to Germany to visit the Fahlbuschs in 1980. He was a believer in preserving the farm and land.

He was preceded in death by his parents, Glen and Roberta, two brothers, Linden and Glendel, and a son, Val Dwayne.