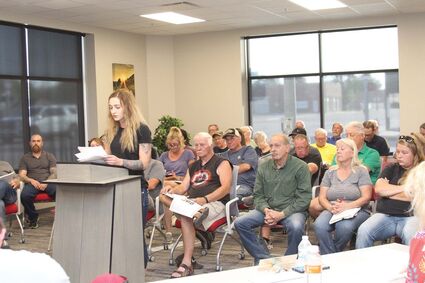 Tiffany LaBeau gives an update on the feral cat program to a full house at the Kimball City Council meeting Tuesday. LaBeau has had 22 cats vaccinated and spayed under her program. Many of those in attendance were concerned with the city's proposed noise ordinance.

The Kimball City Council members met with a packed house on Tuesday, July 19. The crowd patiently waited for the reason they came- – discussion and consideration of noise ordinance #806, which was two-thirds through the agenda.

Once Mayor Keith Prunty said the next issue was "Discuss and Consider a Noise Ordinance," he added that "nothing was written in stone" and asked for people to come to the podium, state their name and make their comments. Kathy Porter spoke first followed by Sonny Porter, then Dale Green, Natoria Wheelock, and Gretchen Green to name a few.

The remarks on the noise ordinance centered around a number of issues:

• The ordinance could clash with the small town atmosphere.

• Commercial properties being exempt while a lot of small businesses in town will be in violation because they are zoned residential.

• The city needing to purchase equipment for the noise ordinance.

• Police needing to be trained.

In reference to the noise ordinance, City Attorney Matt Turman explained that "this is a place to start and work from."

He said the original ordinance was modeled for Lincoln and has been adopted by the first class cities in the state." Turman continued that he tried to soften up the ordinance but "left in the list of uses (exemptions to the ordinance) because those are easy to knock out." Turman said exemptions were listed for all agricultural equipment, industrial lots, and rural residential lots.

In a twist to the noise issue, Lanny Little agreed that comments of concern about the ordinance were valid. He noted that this is an agricultural community.

"I moved here because I wanted to get peace and quiet," Little said. "Nobody has addressed the fact that these businesses are in a residential area. Now, I don't know why they think their ability to have this right supersedes my ability to live in peace and quiet."

Finally, Councilman Creg Pike said, "We need to understand better what is allowed in residential and what is allowed in commercial and industrial – that was the whole impetus for this. And I think that means table this. Let's talk about residential, industrial and commercial cause that is the zoning we need to be dealing with, and this is what is going to affect us when we grow."

When the council voted to table the issue, the majority of the crowd quickly exited the meeting.