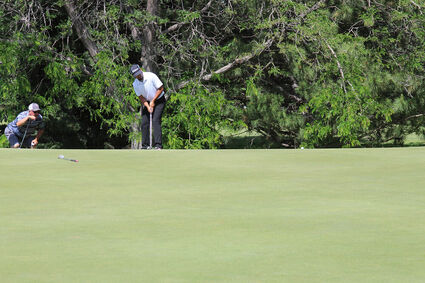 Sergio Tarango watches his putt on the ninth hole head straight for the hole, while teammate Troy Hedin provides an extra set of eyes. Tarango sunk the long putt to the delight of himself and his team in the Father's Day Classic.

The field of golfers at Four Winds ranged from 8-year-old Graham Braash to two men in their mid-80s. Bohac stressed that it is a family-oriented event and he said "those that played with their Dads are pretty lucky."

Bohac is quick to praise all that helped make the tournament run efficiently. Greg Robinson is the treasurer of the Thursday Night League, and he had to stick around to write checks for all the winners. Course superintendent Jeremy Williams had to get up early and put new cups in and then played with h...