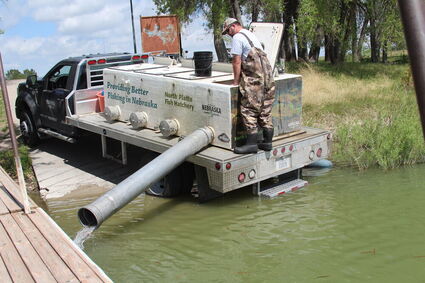 Ted Bartels from Nebraska Games and Parks does his job on Tuesday, stocking Oliver Lake wit 12,000 walleye and 1,500 tiger muskie.

On Tuesday morning, Oliver Lake was stocked with 12,000 walleye and 1,500 tiger muskie from the Nebraska Game and Parks in less than an hour.

Walleye are the most popular fish and Nebraska Game and Parks Hatchery raises about a million of them.

By summer's end, the tiny month-ol...