The Road To Guatemala

It Passes Through Kimball For Caravan Of Toyota SR5 Pickups 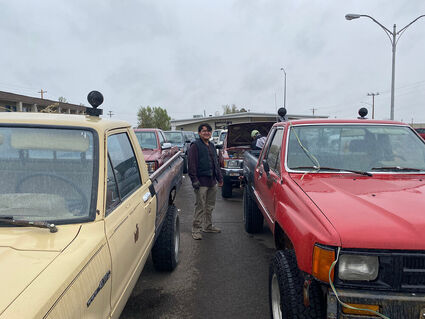 Diego Mendez and his entourage overnighted in Kimball on their way to Guatemala with 14 Toyota SR5 pickups.

The capitalistic spirit is alive in the Central American country of Guatemala.

A caravan of used Toyota SR5 pickups stopped at Days Inn in Kimball on its way from Gillette, Wyo., where they were acquired to be sold and used in Guatemala.

Twenty-year-old businessman and mechanic Diego Mendez said they located the vehicles in South Dakota, Montana, North Dakota, Wyoming and Nebraska, and then picked them up in Gillette. The parade of Toyotas had seven drivers, each driving one vehicle and towing another pickup.

Mendez explained that some of the pickups have problems.