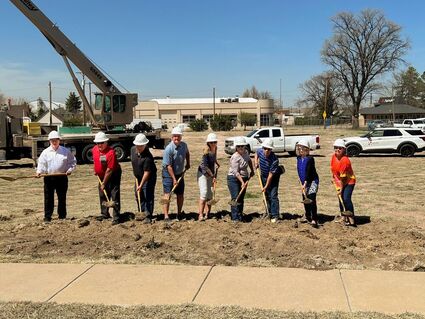 With the turn of 10 ceremonial golden shovels, Kimball Health Services officials broke ground May 11 on a new $43.6 million hospital, kicking off a long-awaited 18-month construction project to replace its 70-year-old facility.

Completion of the new 61,200 square foot hospital on the playground of the former West Elementary School, located two blocks from the current facility in Kimball, is expected in the fall of 2023. A pair of 40-year USDA loans totaling $34.2 million, $6.4 million in general obligation revenue bonds approved by Kimball County, several grants and a capital fundraising campaign of $2.2 million will combine to complete the project’s financing.

While federal and local officials speaking at Wednesday’s ceremony praised the new hospital’s modern design and touted the positive impact it’s expected to have on the community, Kimball Health Services CEO Ken Hunter focused on the hospital staff and their ability to take local healthcare itself to a new level.

“The hospital of the future is more than bricks and mortar,” Hunter said. “They alone don’t make a great hospital. People do. Up-to-date facilities matter a lot, but what matters most is the people staffing the hospital and operating the equipment. I’m extremely proud of our health providers and the entire hospital staff and believe they’re more than up to the challenge.”

“Especially in rural America, access to health care is essential, not only to the wellbeing of patients, but to the wellbeing and vitality of the community,” Bolz said. “I’m proud to be a part of this important work.  I know today’s success represents hours of effort from my staff and from the leadership and community members here.  More importantly, I know it represents a doubling down on this heartland community, it represents our shared belief that Rural America is hometown America. It represents our spirit and character of caring and tenacious people who invest in ourselves and our communities.”

Kimball County Commissioner Carl Stander called the groundbreaking an exciting time for the residents of Kimball.

“I believe it is the responsibility of elected officials to protect and maintain a quality of life for their citizens,” Stander said. “This new hospital project not only protects but greatly improves the quality of life for Kimball County and the surrounding area.”

General contractors Haselden Construction Co. of Centennial, Colo., whose prior work in the region includes expansion projects for UC Health and Poudre Valley Hospital in Fort Collins, Cheyenne Regional Medical Center, Ivinson Memorial Hospital in Laramie, and a new hospital in Meeker, Colo., will get started at the Kimball site after June 1.

“Haselden is excited to begin construction on this world-class facility to match the world class care provided by Kimball Health Services,” said Eric Blanke, the company’s director of business development. “Kimball Health Services has been serving its rural communities for decades, and we are honored to build this long-awaited facility allowing them to serve for decades more.”

Dr. Judd Dawson, chief medical officer at KHS, was candid about the need for the new facility. During the last five years, demand for services at the current hospital have steadily increased. Hospital discharges increased 24 percent, specialty clinic visits increased 65 percent, imaging services increased by 50 percent and surgeries increased from 16 in 2016 to 303 in 2019. Dawson said the current 1950s facility wasn’t designed for today’s volumes or patient care needs.

“The demands on the teams providing care have never been greater,” Dawson said. “Medical knowledge is now estimated to be doubling every 90 days.  The need to integrate technology into the everyday is here and now and without it, we will not be able to get new talent.  We will not have the space to provide care for you and your loved ones, or the infrastructure to accommodate services that are needed.”

“The hospital senior staff has worked very hard to make a new hospital in Kimball a coming reality,” Cederburg said. “The citizens in our local communities have also been consistently in strong support of the project and have generously contributed to the capital campaign.

“The new hospital will prove to be a treasured and valuable asset for our communities,” he concluded. “I can imagine a time when one of us will be in the hospital as an inpatient and a grandchild will ask, ‘“Did you find it, or was it already there?’ You will know how to respond. You can say with confidence, ‘No, we put it there.”’