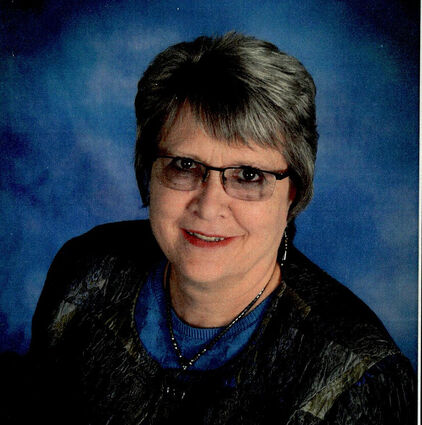 Barbara Lee Stoddard was lifted to heaven on the wings of angels on May 6, 2022, after a long, hard fought battle with cancer.

Her memorial service will be Saturday, May 14 at 9:30 a.m. at the Harrisburg Community Church and burial will follow at the Pleasant Hill Cemetery in the Hull community. Visitation will be Friday from 5-7 pm at Dugan Kramer Funeral Chapel. Memorials can be given to Cattlemen's Ball Cancer Fund. Condolences can be mailed to 1605 R St., Gering, Nebraska 69341. Fond memories and condolences may be left at http://www.dugankramer.com.

Barb was a loving wife, mom, grandma and great grandma (grammy). She truly enjoyed getting together with family and watching all the kids play. She will be dearly missed and so many wonderful memories will be treasured.

Barb was born on December 19, 1944, to Robert and Ila Downer. She was one of 6 children and grew up on the family farm near Harrisburg. She attended Harrisburg K-12 school and was active in many school and 4-H activities throughout the years.

She married Larry Stoddard on April 16, 1961, at the Hull Methodist Church. She and Larry had 2 children, Roberta and Monty. They farmed and ranched in Banner County for 30 plus years and were members of the Hull Methodist Church. Working on the farm was always a family affair, it wasn't uncommon to find her in the corral with a baby calf, helping a ewe give birth or stitching up a baby piglet that the momma had stepped on.

When the kids become school age, Barb went to work at Bluffs Western Wear in Scottsbluff. She worked there for several years before becoming an assistant clerk at Banner County Court House. She was then elected Banner County Clerk & Assessor and enjoyed her work. She also worked at the Scotts Bluff County Court House before taking an Appraisal position, with the State of Nebraska. She wrapped up her 34 years of appraisal work in Howard and Hall counties in central Nebraska before retiring in 2016. She and Larry then made the move to Gering to be closer to family.

Barb and Larry loved attending their kids, grandkids and now great grandkids activities. If you know Barb, she could often be heard from the bleachers! She had a passion for competition.

She enjoyed the University of Nebraska athletics; her highlight as a UN volleyball fan was being able to attend several of the games in person. In the fall and winter months, she'd often be found in her easy chair watching Husker volleyball, football or basketball on TV, with Larry by her side. She loved animals and was never without a furry friend, often times while watching a game she'd have a lap dog or two sharing her chair.

She enjoyed bowling and bowled on a league for several years, even participating in some state competitions. She loved a good game of cards or competitive game of Monopoly.