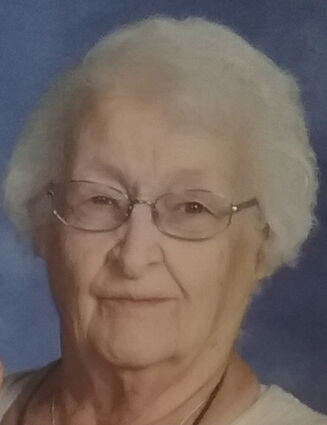 Ruby Virginia Bailey went to be with the Lord on February 7, 2021. She passed away peacefully near Bennett, Colorado, at the home of her daughter, Kathleen Kaczar and son-in-law, Daniel Kaczar.

Virginia was born on September 4, 1929, at home near Fairport, in Russell County, Kansas, to parents Opal (Pierce) and Edward Oswald Jr. She grew up there with her five siblings and attended schools in Fairport and Paradise. She graduated from Paradise High School with Valedictorian honors.

She married Robert Wayne Stielow on May 31, 1947. She and Bob lived in the Russell area and had 3 children. They later moved to Kimball, Nebraska, where they lived for many years. Bob's work in the oil fields took them to the Woodrow and Anton, Colorado area where they were living when Bob was killed in a one vehicle accident on July 30, 1984.

Virginia then moved to Akron and went to work waiting tables in the Norka Hotel. There, she became fond of a regular customer, Rev. John Willard Scott. They were married on April 25, 1987. They lived on Birch Street until he passed away, January 1, 2002. Two years later, she was shopping at Odell's, a local grocery store, when a man bumped his buggy into hers and said, "Well, hello Virginia!" It was her friend from Woodrow, Colorado, Leonard Bailey. It turns out Leonard had also lost his wife, Lois, several years earlier. They were married on December 13, 2003, and enjoyed many happy years together.

In addition to waiting tables at the Norka Hotel and being a wife, mother, grandmother and great grandmother, Virginia drove a school bus in the 1950s and worked at the Anton, Colorado Post Office.

Virginia loved to quilt, crochet and embroidery beautiful items and gave them away as gifts to many friends and family. She also loved to read and put together jigsaw puzzles.

She and Leonard relocated to Bennett, Colorado, four years ago due to declining health.

She is preceded in death by her parents, two husbands, 3 sisters, and 3 great- granddaughters.

She will be buried next to Robert Stielow at the Ash Hollow National Historical Cemetery near Lewellen, Nebraska, at a time and date yet to be announced.