Cobras Come Up Big At State For Kimball 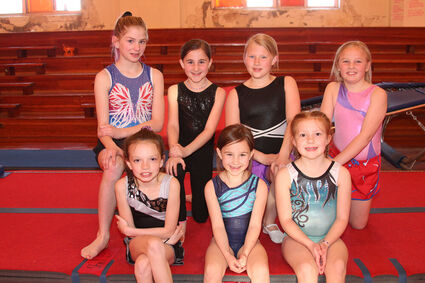 The Kimball Cobras Trampoline and Tumbling team members showed off their skills at the State meet at WNCC in Scottsbluff on April 2. And show off they did with four young ladies winning State Championship in their division.

Level Five state champion Shaylee Markum, 8, put it all into perspective when she said, "I got two first and a second, when I figured it out I went, REALLY!" She received first in floor or tumbling and the double mini. When competing in the floor she starts her routine running down the elevated spring runway, doing a power hurdle round-off, then six back handsprings.

Shaylee confided that she is thinking "Whenever I put my hands down I have to make sure I don't do more than six. Cause one time I actually did seven, and I don't want to do seven."

In the double mini, Shaylee said she tells herself, "You can do this, it is OK if I don't do it, because I just stay positive. If I get the bad thoughts in my brain, I just can't get them out. So I have to stay positive or I might mess up."

Breckyn Kiefer, at 11-years-old, is the quiet experienced leader of the Cobras; she began the sport as a 3-year-old and continues with a strong work ethic at practices. Competing in the Elite Level 8 division, Breckyn placed first and was the state champion in floor. Her routine consists of three whips, three back handsprings, and a back straight. While the rest of the team expressed their thoughts as they do their routine, Breckyn says, "I don't think of anything." She just gets the job done.

The Enevoldsen sisters Delayni, 9, and Kira, 7, both came home as floor state champions, Kira in Level 3 and Delayni in Level 4. Kira said she thinks about how straight she needs to be and also "If I am going to get first place, cause I either get first place or nothing." After the power handspring round-off, Kira does three back handsprings. Both of the Enevoldsen girls admit they have been scared while participating but they have put their fears behind them and excelled.

Delayni shared what she thinks about while competing, "Well, first of all I am thinking of me either running to Riley and she hugging me and being really excited or my Dad bribes me with something. I am thinking of that." Delayni thinks the best part of being involved in Cobras is "coming here and practicing and seeing all my friends."

As for now, five of the team members are off to Salt Lake City for Regionals, and Breckyn has qualified for Nationals in all the events.