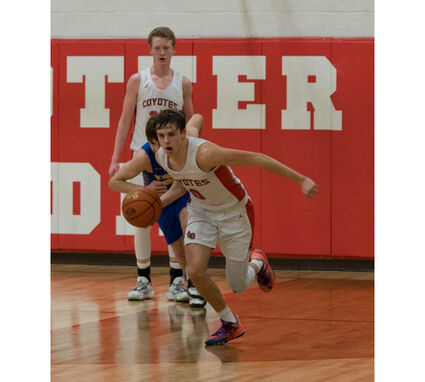 Potter-Dix senior Thomas Muldoon heads up court after securing a rebound during the Coyotes' win over South Platte in the Subdistrict final.

Potter-Dix's Coyote basketball team entered the D2-11 Subdistrict Tournament as the clear favorite, and had no trouble defeating their two opponents to move on to a District final against Mullen at Hershey High School on Tuesday, March 1.

First, Potter-Dix faced Creek Valley on Tuesday, and easily breezed past the Storm with a 62-24 win to set up its meeting with South Platte in the finals on Thursday.

Potter-Dix opened a lead early and behind leading scorer Luke Kasten continued to pull away from the Knights through the contest. Potter-Dix had built up a 20-point lead at the end of the th...