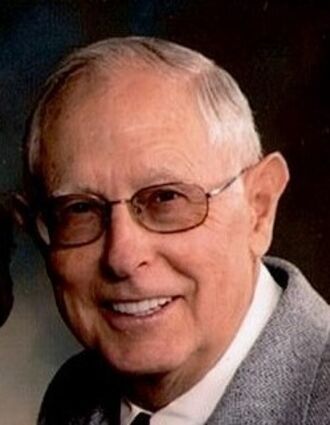 Funeral services can be viewed by live stream at Presbyterian Church of Kimball. Burial will follow the funeral at the Dix Cemetery. Fond memories and expressions of sympathy may be shared at http://www.cantrellfh.com.

In lieu of flowers, memorial gifts may be made to the Kimball Presbyterian Church, Kimball Community Foundation or Kimball Hospital Foundation.

Cantrell Funeral Home is in charge of the arrangements.

Howard DeWitt Atkins was born November 24, 1935, to Vernon and Virginia (Stearley) Atkins in Kimball, Nebraska. He lived on the family homestead six miles north of Dix until age 2 when the family moved to Washington Street in Kimball.

In 1947 the family traded houses with his paternal grandparents and moved north of Kimball to Brookside Farm. He attended Kimball schools, graduating from Kimball County High School in 1953. He graduated from the UNL College of Agriculture in 1957. A highlight of his university experience was being a member of the Alpha Gamma Sigma Agriculture Fraternity where he made lifelong friendships.

Howard married Peggy Greathouse on June 18, 1961, in Dix. They raised their three children at the Atkins Homestead 6 miles north of Dix where he farmed. Later, the family moved to a home north of Kimball so Lynn, Renell and David could attend school in Kimball. During the summer months, they continued to live at the farm north of Dix.

Howard was a true agronomist, taking great care to create good seed beds to establish quality stands of wheat and millet for 50 years.

He traveled widely and remained a dedicated member of the Kimball Presbyterian Church, AGS Fraternity, Farm Bureau, Nebraska Community Foundation and Legacy of the Plains Museum.

He greatly enjoyed music, received Outstanding Farmer recognition at Farmers Day in Kimball, planned a community walking trail for Kimball, and saw community members step up to build the trail.

He was preceded in death by his parents and sister Dolores Horton.