Oliver Lake: Then and Now 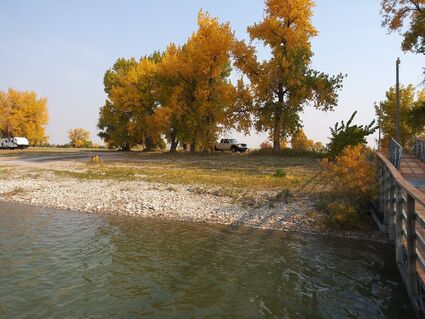 Oliver Lake is a sight to behold when the leaves turn in fall.

In preparation for summer fun and recreation, area campers, fishermen, hunters and boaters will want to attend the Oliver Reservoir Recreation Area Information Meeting – Past, Present, and Future on Feb. 17 at the Kimball County Transit Service building.

Wittrock will provide an overview, the goals and management practices for Oliver Reservoir. At the same time, Oliver Reservoir local historical expert Larry Stahla will give a synopsis of the dam and reservoir history.

Few people remain who have knowledge of Oliver's Save the Lake organization.

According to Stahla, Oliver originated in 1909 as an irrigation district. In a much simpler era, the dam was completed in December 1911 using mostly horse-drawn equipment. Oliver functioned as an irrigation district until the mid-1970s, when dam inspectors condemned the dam because the original 5 inches of reinforced concrete had water seepage that had deteriorated the concrete.

Stahla credits not only the community for the financial contributions to Save the Lake, but Cheyenne County and the Pine Bluffs area were also instrumental in helping fund the work on the lake.

After Stahla's history and explanation of Save the Lake, Chris Kaiser from SPNRD will review the monitoring and water quality for the area. Finally, Nebraska Game and Parks will present information on hunting and fishing.