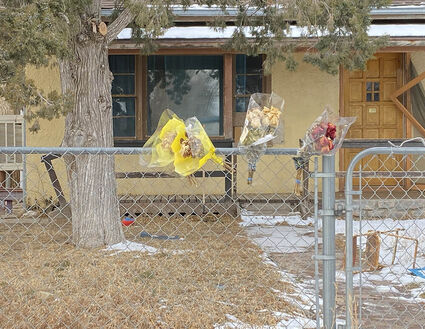 Flowers have been left at the site of the shooting that took the life of Tessa Ghering at 602 Oak St. in Kimball.

The manslaughter case of the State of Nebraska against William Serrano remains in Kimball County Court for now. Court documents show that a preliminary hearing is scheduled for Feb. 11.

Serrano, 36, is charged with manslaughter, which is a 2A felony. He is accused of shooting his girlfriend, Tessa Ghering, 21, at their home in Kimball. Ghering died at the scene.

On Jan. 20, all parties appeared via telephone and/or Zoom or Webex for a hearing in which the bond was discussed. The motion for bond reduction was denied and it was ruled that "all prior bond conditions remain in full force and effect."

Another bond condition was attached: "Defendant shall have no contact whatsoever, either in person or through third parties, with the children who may be witnesses in this case."

In response to question from the Observer, the Nebraska Attorney General's Office gave this reply:

"The Attorney General's Office was appointed at the request of Dave Wilson, Kimball County attorney. There is a preliminary hearing scheduled for February 11 at 1:30 pm MST in the Kimball County Court. The court will determine whether there is sufficient evidence to bind the case over to District Court for trial.

"The case is still being investigated and no other information will be released. Mr. Serrano was charged with involuntary manslaughter by the Kimball County Attorney."