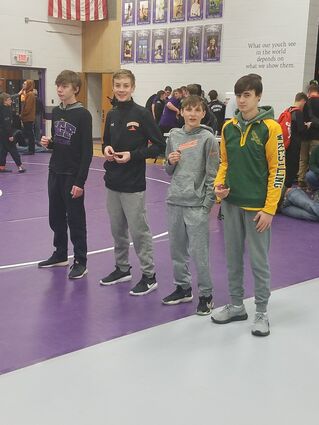 The Kimball Longhorns wrestling team goes into back-to-back meets this week after a competitive performance at Garden County to start off the second semester portion of the season.

The Horns went to Garden County on Jan 8 and placed ninth in a tough 22-team tournament with 57 points.

Matthew Johnson led the way with a 4-1 record to place third on the day at 106.

James McGinnis continued his solid season with a 4-1 record on the day to place third at 132.

Trey Schindler had a great day of wrestling. He beat a 12-2 wrestler from Garden County in the consolation semi in double overtime to get into the placing round. He finished the day 4-1 to place third at 152.

Justin Klosterman continues to improve as a first-year wrestler but was 0-2 at 138.

"We wrestled some tough competition today at the Garden County tournament," coach Cory McManigal said. "I felt on the day we won some quality matches but didn't really put together good crisp wrestling. This was a bit of a disappointment compared to our preparation coming back from the Christmas break practices.

"Sometimes when you have interruptions in your preparation like we did with the school closure due to weather, that can stall growth in one's training. There will be some things from the tournament that will have to be addressed to get ourselves ready for the upcoming weeks of competitions."

The Longhorns will return to action this week with back-to-back meets in Chase County.