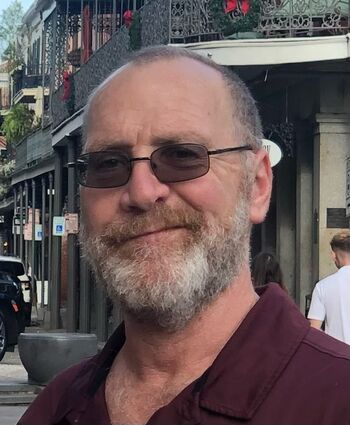 Ronald M. Richter, 63, of Kimball, died at Kimball Health Services on Sunday, January 2, 2022. Funeral services were held at 10:00 a.m. on Saturday, January 8, 2022 at the Cantrell Funeral Home in Kimball with Pastor Roger Gillming officiating. Cremation was held following the service. Friends called at the funeral home on Friday from 1:00 until 6:00 p.m.

Fond stories and memories may be shared with the family by visiting http://www.cantrellfh.com . Memorials may be given in Ronald's memory to either St. Jude Children's Hospital or the Make-A-Wish Foundation. The services for Ronald have been entrusted to the Cantrell Funeral Home.

Ronald Michael Richter was born in Sibley, Iowa on October 27, 1958, the son of Norbert and Kathleen (Streit) Richter. He lived in Ashton and then Sheldon, Iowa, and graduated from the Sheldon High School in 1977.

Following graduation, Ronald worked for Dennis Klatt Maintainer Corp. for 2 years before marrying Denise Kanengieter on August 15, 1980 in Sheldon, Iowa. They moved to Loveland, Colorado and Ronald worked for several manufacturing companies in the area, including Buzz Foley in Ft. Collins, US Engineering in Loveland, Mayo Industries and Black Eagle Energy Services both in Berthoud, and Wood Group in Mead. Ronald was employed by 3W Livestock at the time of his death.

He enjoyed sports and was a fan of the Denver Broncos and Denver Nuggets. He loved to fish, camp and enjoyed going to dances. Ronald enjoyed trips on the motorcycle with Denise along the Front Range of Colorado. Spending time with his family and friends was always important to Ronald.