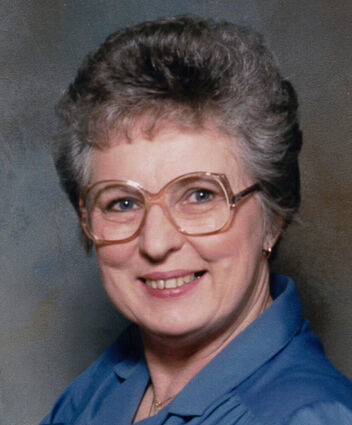 Rita was born March 21, 1929, to Leddy and Joe Heille in Wadena, MN in the front bedroom of her maternal grandmother's (Theresia Kraemer) home. She graduated from Edison High School, North East Minneapolis, with the class of 1946.

Rita grew up during the Depression and rationing during WWII in Minneapolis. She met her future husband, John Maginnis, who was visiting his sister in Minneapolis. They married and moved to Sioux Army Ordinance Depot, NE. They then moved to Kimball, NE, where Rita took a parttime job with Dr. Shamberg; however, she stayed and was trained to be a nurse, as well as a lab and x-ray technician. As various doctors left, she stayed working with the new doctors. When asked what she wanted to be remembered for, she simply said, "I loved and served the people of Kimball, her hometown."

Rita enjoyed going places in the tri-state area with the Red Hatters. She sang in the church choir, also, being a lay Eucharistic Minister, and lecturer. She sang with a tri-county choir and performed with them at the Rockefeller Center Radio City Music Hall, NY. (Where her favorite, the Rockettes dancers, perform).

She enjoyed being a state of NE host at the I-80 East bound Visitor Center. She enjoyed the companionship of the Kimball Friendship Center and being a quilter there. She was grateful to the citizens of Kimball for welcoming a city girl, and in December of 1999 she was presented with the key to the city and in 2002 made Neighbor of the Year.

She is preceded in death by her brother Bernnie and husband John.

Condolences may be shared with the family at http://www.leavittsmortuary.com