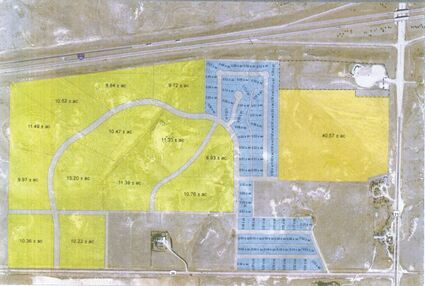 The Kimball City Council met in regular session on Dec. 7.

The city staff and the city attorney were directed to investigate the matter and the cost of infrastructure due to an annexation request by Ryan McElroy and Stephanie Risk-McElroy.

The McElroys own a parcel of land they are requesting to have annexed by the city of Kimball. Their voluntary annexation petition said “the property is within the extraterritorial jurisdiction of the City and is adjacent to the present corporate limits of the City.”

The request came with three different McElroy Lot Concepts maps and a gWorks map of the property. According to the Kimball County GIS site, Ryan McElroy and Stephanie Risk-McElroy purchased the 104 acres from Lyle Yung in 2017. When annexation takes place, the city services must be extended to the annexed property, according to state statute.

“Right now with the state of Nebraska, you have to do 10 acre lots,” McElroy said. “If we annex, then we can do it in lots.”

The matter will be taken up again in January.

Meanwhile, the city is looking to sell two parcels north of the Kimball County Manor. Parcels 530018519 and 530018527 are city-owned properties, and a request for proposals was approved by the council with the deadline of Feb. 10 set to receive proposals. A packet is available from the city for the RFP.

Prunty said, “Next on our agenda will be discuss and approve Ordinance 800, an amendment to C-4 zoning to allow for a game of chance and a racetrack.” It was decided to approve the ordinance with two readings. The council will opt out of the third reading.

Ordinance 801, according to Prunty, is “pretty much limiting gambling to out there.” City Attorney Matt Turman stated that the ordinance is “basically a model ordinance to decriminalize gambling within licensed racetracks.” The motion was made to pass and approve ordinance 801 on the second reading.

City Administrator Annette Brower's report informed the council that the Dollar General parking lot upgrade has been delayed due to illness within the company doing the work.

She confirmed that the Family Dollar/Dollar Tree project is moving forward. Concrete will be poured, and the erectors will go up soon afterward.

The automatic meter reading program is waiting on one part, a cradle point. Once the cradle point gets installed, Brower said, “We will get to fire up immediately and instantly start getting data from our test sites.”

It is hoped that the automatic meter reading program will encompass the entire town very soon.

Meanwhile, the economic developer position is being advertised and will continue to be advertised for the next couple of weeks.

Brower also explained that the electric department is still working at the Rook's RV Park.

The next council meeting will be Jan. 4 in council chambers.