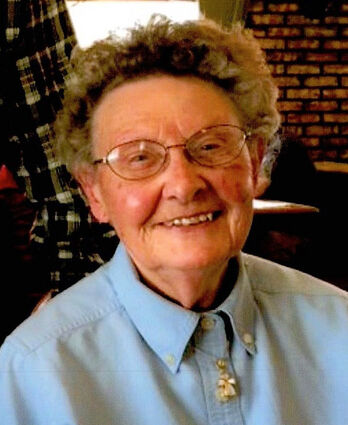 Beatrice E. (Wilkinson) Heidemann, 98, of Kimball, died November 27, 2021, peacefully at home. Services will be held Thursday, December 2, at 10:00 a.m. at St. John's Lutheran Church, 601 S. Locust St. in Kimball, with Pastor Kenneth Mars officiating. Burial will be in the Kimball Cemetery. Friends may visit from 1:00 to 5:00 on Wednesday, December 1, at Cantrell Funeral Home. Expressions of love and friendship may be left on Bea's tribute wall at http://www.cantrellfh.com. Cantrell Funeral Home is in charge of the arrangements.

Beatrice E. (Wilkinson) Heidemann was born in Kimball, Nebraska, on March 25, 1923, the only child of Otto G. and Dolly (Cross) Yaege. She was baptized in the home on July 16, 1923, by the Rev. Henry Ives and confirmed June 1, 1936, in St. Hilda's Episcopal Church by the Rev. George Allen Beecher, Bishop of Western Nebraska.

She received her education in the Kimball Public schools, graduating on May 22, 1941. Following graduation she worked a short time for L. R. Eastmen Real Estate, Insurance and Abstract Company, and in 1943 began her employment with the law firm of Torgeson and Halcomb. She continued as legal secretary until her retirement in April 1992. She was also secretary-treasurer for St. Hilda's Church and the Kimball Cemetery Board.

On December 5, 1951, in St. Andrew's Episcopal Church in Scottsbluff, Nebraska, she was married by Rev. Clyde Whitney to David Thomas Wilkinson. David passed away May 28, 2012. They had no children but for 60 years of marriage enjoyed a large and loving family of nieces and nephews.

During her residency in Assisted Living-Kimball County Manor, she became reacquainted with Edward Paul Heidemann. They were married on May 1, 2015, at St. John's Lutheran Church in Scottsbluff, Nebraska, by Pastor Kenneth Mars, and she became stepmother to two sons, three daughters, and their families.

She was active in her churches, enjoyed music, singing in choir and chorus, sewing, gardening, and volunteering at the Kimball Manor.

Survivors include her husband Paul Heidemann, nieces and nephews, step-children and grandchildren. She was predeceased by her parents and first husband Dave.