In the top photo, Kimball vocal instructor Jacob Hoffman directs the fourth-, fifth- and sixth-graders in a beautiful rendition of the "Armed Forces Salute" during the community's annual Veterans Day ceremony. Lower photo: Some of the honored vets take the stage.

Gideon Casimiro was the master of ceremonies for Kimball's Veterans Day ceremonies at the Jr/Sr High School.

After the Presentation of Colors, Mayor Keith Prunty spoke briefly to the crowd encouraging veterans "to share their story with others and let everyone know what you have done. If you are not a veteran, ask them about their service or simply say, 'thank you."

In a beautiful song titled "Armed Forces Salute," the 4th, 5th, and 6th graders performed for the crowd. The medley included the U.S. Air Force, "Anchors Aweigh," the "Marines' Hymn" and "The Army Goes Rolling Along" while veterans from each branch stood during their song. 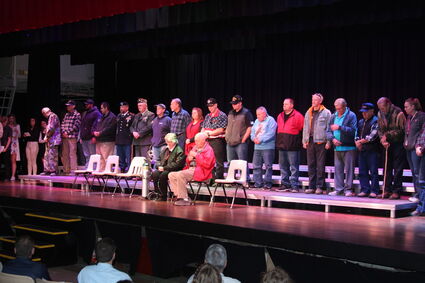 Vocal instructor Jacob Hoffman told the Observer that the elementary children "rehearsed in class for approximately one month to learn the medley." He also said he was "very proud of the kids for working so hard to get ready for this performance. Throughout the process, we discussed the veterans, how Veterans Day originated, and why we must take this performance seriously to honor our veterans."

Using letters from veterans, a group of seniors stated their appreciation for the veterans, and then Chloe and Rachel Berger played a piano duet, "Battle Hymn of the Republic."

Pastor Tyler White was the keynote speaker and used his speech to explain in-depth the history and meaning of the Pledge of Allegiance.

The program concluded with a local veterans video and the playing of Taps by Jayden Paxton.