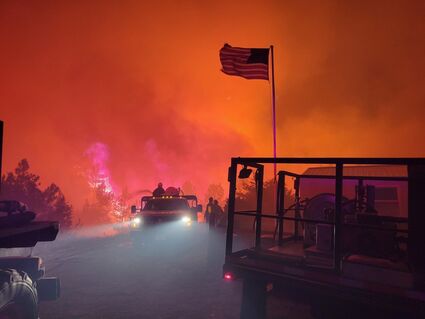 Old Glory just behind them, firefighters try to water down the ferocious Buffalo Creek Fire in Banner County. See other photo, Page A5.

Firefighters made good progress containing the fierce Buffalo Creek Fire, according to a report provided Tuesday to the Observer.

Local and state partners were said to have utilized multiple resources during management and suppression efforts.

Through MMA flights and ground mapping, the fire was at 2,560 acres and was still 40% contained Tuesday.

Very minimal growth occurred over the previous 12 hours as of Tuesday morning. Several homes were in the immediate path of the head of the fire and still threatened.

As of Tuesday, no structures had been lost. Energy Infrastructure, agricultural infrastructure and watersheds have been impacted.

Top priority has been safety for the public and firefighters. About 90% of the fire perimeter is within the state wildlife management area. On Tuesday, firefighters were focusing their efforts on structure protection and suppression along Wrights Gap Road in Division Alpha.

Plans were for helicopters to be utilized to cool areas where terrain was inaccessible. Firefighters were also coordinating suppression efforts along the western perimeter in Division Hotel, securing the fire with burnout operations and mechanical lines.

The fire was approximately 4 miles west of Wildcat Hills Estates and current does not pose any threat to the Estates.

Weather patterns in the middle of the week were expected to assist with containing the fire. Long term weather will still allow this fire to produce pockets of heat, officials said.

Chief Grubbs continued to thank each and every fire department and firefighter that has worked hard to bring this blaze under control.

Fire managers are expected to continue operations through the week to improve containment lines and focus on confinement efforts. Containment means the fire will not leave the area defined as contained. Even though the fire was 40% contained, smoke and heat will be visible within the perimeter for weeks or until significant moisture.