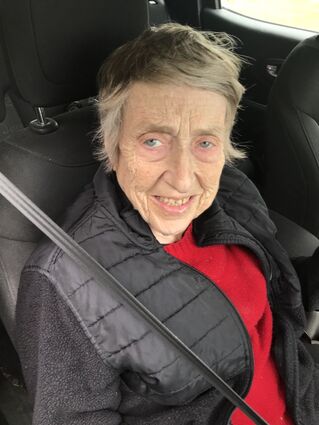 Carolyn Mildred Schaeffer (Temple) died peacefully at her home on October 28, 2021, in Gering, Nebraska, at the age of 88. Memorial services will be held at 11:00 a.m. on Friday, November 12, 2021 at the Cantrell Funeral Home in Kimball with Pastor Ann Sundberg officiating. All are welcome to attend and celebrate Carolyn's life.

The family would like to thank Helping Hands of Scottsbluff, Nebraska, and the Gering Police Department. Inurnment will be held in the Dix Cemetery. Fond memories and expressions of sympathy may be shared at http://www.cantrellfh.com for the Schaeffer family.

Memorials may be given to the donor's choice. The services for Carolyn have been entrusted to the Cantrell Funeral Home.

Carolyn was born on October 2, 1933, in Axtell, Kansas, to Claude L. Temple and Velma M Temple (Campbell). She was the second of three children. The family lived on a farm outside of Beattie, Kansas, the first nine years of Carolyn's life. The family then moved to Ithaca, Nebraska, and then moved to Wahoo, Nebraska. Carolyn graduated from Wahoo High School in 1952. She attended Lincoln General Hospital School of Nursing in Lincoln, Nebraska, and graduated in 1955.

She accepted her first nursing job in Sidney, Nebraska, and met her future husband, Herbert Harvey Schaeffer. The couple was married on July 26, 1956, in Dix, Nebraska. The couple had four children, Susan, Ivan, Barry, and Gary. The family lived in four different states, and Carolyn worked as a nurse until 1975, when she was placed on disability due to back problems.

Carolyn was a loving and caring wife and mother who would do all that she could for her husband and children. After Herbert's death in 1996, Carolyn lived with her daughter, Susan, in Cheyenne, Wyoming, Laramie, Wyoming, and Chadron, Nebraska. When Susan passed away in 2020, Carolyn lived with her son, Ivan, in Gering, Nebraska, until her death. Carolyn volunteered for different organizations. She was a den mother for the Boy Scouts of America in Port Orchard, Washington. While living in Chadron, Nebraska, she volunteered at the Chadron Senior Citizen Community Center/Meals on Wheels. She was also a member of the Nebraska Federation of the Blind.

She is preceded in death by her parents Claude and Velma Temple; husband Herbert Schaffer; daughter Susan Schaeffer; and brother Howard Temple.