I Would Do It AGAIN 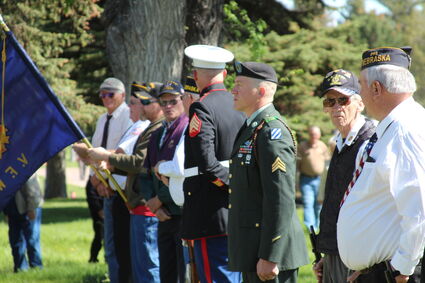 Former Army Sgt. Nate Entingh of Kimball stands at attention prior to the Memorial Day program at the Kimball cemetery in May. He served two tours in Iraq in 2005 and 2007.

"I would do it again," said former U. S. Army Sergeant Nate Entingh on his service to this country during Operation Iraqi Freedom. Entingh served two 15-month tours of Iraq, one in 2005, and he returned to Iraq in 2007. Entingh was part of the Third Infantry Division, Alpha Company, 369, third battalion, 69th armor regiment.

In 2003, the United States was still reeling from the terrorist attacks of 911, and the job market had evaporated, so at 22, Nate Entingh signed up for a five-year stint in the U.S. Army.

He shipped out of Denver to basic training in Fort Benning, Georgia. After basic training, it was onto 14 weeks of Infantry Fighting School and then three weeks of Airborne School at Fort Bragg, North Carolina, then Iraq.

Veterans Day and Memorial Day remind Entingh of what he took away from his time in the service – the friendships, the brotherhood of service. Still, more importantly, Entingh said he learned the most about himself during his time in the Army. Ultimately, he learned respect for other veterans.

"It was good; I learned how to really test myself; you always think I am so hot, I am so tired; Oh no, you aren't, you can go a lot farther, you can run a lot harder."

After Fort Bragg, Entingh and his company were sent to Fort Stewart and quickly transported to Iraq.

Entingh's first assignment was in the oldest Iraqi city, Samarra. He spoke of the beautiful golden-domed mosques and adjoining courtyards that insurgents or Syrians eventually destroyed after he had left.

For his first 15-month deployment, Entingh and his company had a variety of assignments. their daily tasks changed.

"A lot of times we were watching streets and positions to see if could catch people moving or doing things they weren't supposed to do," he said. "Protecting our outposts or protecting our patrols as they were moving through the city. If we had intelligence, we would go get a bad guy; we would go do that, cordon off an area and go and 'snatch and grab' a guy that we knew was doing bad things."

Entingh said that the "rest of the time we were doing 'hearts and minds' bringing rice and flour to the people, trying to connect with them. This was every day; we didn't get a day off, but one time on my first tour, we went to LSA Anaconda."

Any soldier's eyes would light up when they received the special treat of 24 hours at Logistic Support Area Anaconda. Even today, former Sergeant Entingh's eyes had a little spark to them as he explained that they were in Iraq for 15 months but had only one 24-hour mini R & R at LSA Anaconda.

LSA Anaconda had, according to Entingh's recollection, a coffee shop, Burger King and an Olympic-sized swimming pool. The facility had an MWR, Morale, Welfare, and Recreation complete with computer setups, internet, and the ability to play video games with each other.

"There were people stationed there all the time, but we got to go for 24 hours, and it was fantastic," he said.

But with only 24 hours to explore the vast base, Entingh and his company never were able to experience the Subway, Popeyes, Pizza Hut, Taco Bell, or the USO Tours that stopped in the base, along with many politicians that visited LSA Anaconda.

According to the history of LSA Anaconda, it was called Balad Air Base and housed 28,000 military personnel and 8,000 civilian contractors, who could enjoy all the amenities of home on a daily basis.

In 2007, when Entingh returned for his second 15-month tour of Iraq, he was sent to Ramadi, which is located in the center of Iraq.

In Ramadi, their initial mission was to establish a base in the middle of a village. Then they trained the Iraqis to be an army instead of a police force. The U.S. forces were watching what the Iraqi were doing.

His company was very cautious around the rural villages. These rural areas were more easily coerced by the enemy. The insurgents from the rural areas created a danger zone of buried bombs along the roadways. Travel in some areas was non-existent until a unit of mine detectors would have to come in and clear the roads.

Nate Entingh was born in Dayton, Ohio. Before his teens, the family moved to Julesburg, Colorado. Entingh went to high school in Yuma, Colorado, and played football, basketball and participated in track all four years of high school.