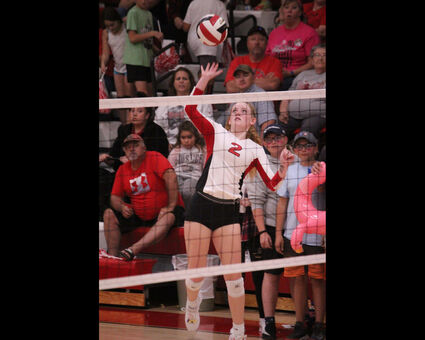 Kimball junior Jayden Paxton goes for the kill earlier this year. The season ended for the Longhorns against Bridgeport in the first round of the C2-11 Subdistrict Tournament on Monday.

The Kimball Lady Longhorns volleyball season ended Monday as the team fell to Bridgeport in straight sets in subdistrict action.

Kimball's season record was 3-21 heading into the C2-11 Subdistrict Tournament at Bridgeport, where the team was scheduled to face Bridgeport, the No. 1 seed. Kimball had faced Bridgeport twice this season, and lost both matches in straight sets.

The subdistrict appearance followed the Kimball's hosting of Perkins County on Oct. 19. The Horns battled hard, but were unable to get the win, falling in straight sets 3-0.

The match started out with a tough battle in t...