By Jim Orr and Daria Anderson-Faden
The Observer 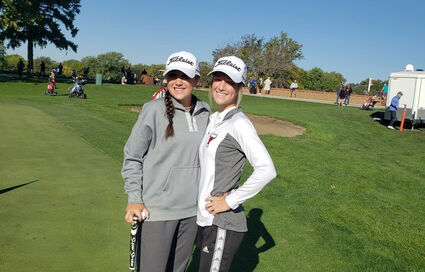 Payton Wise, left, and Katie Heeg "are making Kimball proud," their coach Katie Culek said during the final round of State at Columbus.

The senior duo closed out their high school golf careers in fine fashion – together on the course during the NSAA State Tournament at Elks Country Club in Columbus.

Wise medaled for a fourth time at State – this time in third place – during her splendid four years on the links representing Longhorn Nation.

Heeg, meanwhile, shot two rounds under 100 on the challenging Elks course– an outstanding achievement considering that she took up the game of golf just a few years ago.

On Tuesday morning, during the final round of the two-day state tourney, Kimball coach Katie Culek simply posted these words on the Kimball Public Schools website: "Day 2 of state. Payton and Katie are making Kimball proud."

The individual champion was 10th-grade hometown golfer Cecilia Arndt of Columbus Scotus with a two-day total of 157 – four strokes ahead of Wise.

The Kimball seniors qualified for the NSAA State tournament with their outstanding performances at the C-5 District Tournament at Four Winds Golf Course on Oct. 4.

Wise shot an 80 at District, giving her the District title, and Heeg shot a 92 to earn fourth place.

– Mike Motz contributed to this report.